Summary: Martin of Tours Like St Ambrose of Milan, Martin was an army man who picked up the Christian ethos that had crept into the army through Constantine. Clovis, a century later, became a Christian through his wife Clothilde. Through them the story of France and [...]

Martin by his request, he was buried in the Cemetery of the Poor on 11th November. He .is the first non-martyr to be honoured as a saint and he is regarded as the patron saint of France.

Summary: Pope Leo the great was a layman when chosen for the office; he was able to keep the invaders from the north – the Huns and the Vandals – at bay; he was a focus for unity in the Church; and he gave powerful expression to the dignity [...]

Leo knew how to make himself close to the people with his pastoral action and his preaching at a time when Rome was tried by famines, an influx of refugees, injustice and poverty.

The Lateran Bassilica became the cathedral of the Church of Rome and the seat of the popes for a thousand years..

Summary: Elizabeth of the Trinity spent six years as a Carmelite nun, but like St Thérèse of Lisieux she advanced in holiness in a very short time. As a child Elizabeth had a wicked temper. Once she experienced the sacrament of Penance and her First [...]

John is traditionally regarded as the thologian who put the argument from reason in defence of the doctrine of the Immaculate Conception of Mary..

Willibrord's missionary methods show his conviction of the power of the Christian religion..

Saints Patrick, Brigid, and Colmcille, are saints, as it were, by acclamation of the local Church, before the official papal canonisation process was established.

Zachariah and Elizabeth are willing cooperators with God in his design of "tender mercy".

Summary: St Malachy, Bishop  Malachy was born near Armagh in 1094 . He became vicar of Ceallach, the reforming bishop of Armagh, and he continued this work of reform as bishop of Connor and as abbot and, later, bishop of Armagh. He introduced the Cistercians and the Canons [...]

Christian ritual expresses what Christians believe about death, after life, the resurrection of the body and what we call "life everlasting".

Pope Boniface IV (608-615AD) dedicated the Pantheon in Rome, as a church to St Mary and all the martyrs was the beginnnings of All saint's Day.

Summary A curt summary of the life of Dominic Collins would say:Born in Youghal, Co. Cork in the year 1566, left for France in 1586,returned to Ireland in 1601 as a Jesuit brother, brought back to his native town and hanged on 31 October 1601.

Dominic joined the Jesuits in Santiago de Compostela and was sent back to Ireland in 1601. But he was captured and put to death i n Youghal for his faith.

Summary Dominic Collins was a big man in every way. A soldier of fortune in the Catholic armies of Europe, joined the Jesuits in Santiago de Compostela, sent back to Ireland in 1601 with army of Spaniards going to Kinsale, eventually captured and put to death for his [...]

It seems her father wanted her to marry, but when she refused the intended, fled but was beheaded by Carodoc. She was healed by Beune and dedicated her life to God in a convent.

Colman had a pet rooster who woke him for the night office, a pet mouse he trained to prevent him going to sleep again and a pet fly he trained to mark the place in the manuscript service book where the service left off.

St Hilda was of the royal house of King Edwin of Northumbria and became abbess of the double monastery of men and women at Whitby. Because of the school she founded there [...]

Summary of St Otteran, monk, a descendant of Conall Gulban, is usually identified with Odhran who preceded Colum Cille in Iona. His death is recorded in 548 and his grave was greatly revered in Iona. He was chosen by the Vikings as patron of the city of Waterford [...] 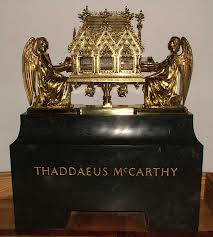 Appointed bishop of Ross, Thaddeus arrived to find another bishop already in possession of his diocese. And things get a lot worse before they get better.

Oct 25 – The Forty Martyrs of England and Wales

Summary: These forty men and women of England and Wales, martyred between 1535 and 1679, were canonised in Rome by Pope Paul VI on 25th October 1970. Each has their feast day but they are remembered as a group on 25th October.

The patience of St. Anthony Claret was tested in the political upheavals of the nineteenth century. His efforts at reform stirred up a great deal of hostility..