Summary : St Leo the Great, Pope, Doctor of the Church, died in Rome on this day in 461. Elected pope in 440. Tried to protect the city from the devastation of barbarian invasion. His surviving letters illustrate the leadership and guidance he exercised as bishop of Rome toward other Churches in the West. Noted for the clarity of his thought on the two natures of Christ, he was affirmed at the Council of Chalcedon, for his eloquent sermons, and for the prayers he composed for the Roman liturgy. 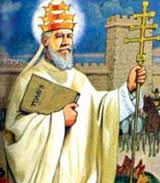 Only three other popes have been given the title “the Great” – Pope Leo I, Pope Gregory I (d. 604) and Pope Nicholas I (d. 867).
Pope Leo heightened the profile of the papacy as the power of the Roman empire declined. After persuading Attila the Hun at Mantua not to proceed further down into Italy, Leo was accepted as exercising universal authority in the church, not only over all the faithful, but over all the bishops in the world as well.

Elected pope in his absence from Rome
Leo was a native of Tuscany and became prominent as a deacon of the Roman Church under Pope Celestine I (422-32). During the pontificate of Sixtus III (432-440) he was sent to Gaul in the summer of 440 to act as a mediator in a difficult situation between a provincial governor and the commander-in-chief in Gaul. While he was in Gaul, Pope Sixtus III died, and Leo was elected in his absence to succeed him. When he returned to Rome, he was consecrated on 29 September 440. His pontificate lasted more than 21 years and was one of the most important in the Church’s history.

A political leader in difficult times
During the invasions from the northern tribes (Huns, Vandals and Goths), the imperial authority in the West had weakened. This long, drawn-out social crisis forced this pope – as it did Gregory the Great a century and a half later – to play an important role in civil and political events.

Against Attila
In 452 Pope Leo went with a Roman delegation, to meet Attila, chief of the Huns, in Mantua and succeeded in dissuading him from his war of invasion in which he had already devastated the northeastern regions of Italy. This important event is emblematic of the Leo’s action for peace.

Against Genseric
A second papal initiative three years later was not quite as successful, but it showed his outstanding courage: in the spring of 455 Leo did not manage to prevent Genseric’s Vandals, who had reached the gates of Rome, from invading the undefended city which they plundered for two weeks. But his gesture of going out to meet Genseric, defenceless and surrounded by his clergy, prevented Rome from being burned. It assured that the Basilicas of St Peter, St Paul and St John, in which the terrified population sought refuge, were spared.

Sermons and Letters
Leo’s 100 sermons – in a splendid and clear Latin – and his 150 letters show his exercise of the Word and his devotion to the service of truth in charity. He presented himself as the Apostle Peter’s authentic heir and as a tireless champion and upholder of the Roman primacy.

Tome of Leo to Flavian
The most important letter of Leo was that sent to the Patriarch of the East Flavian, which when read to the bishops assembled at the Council of Chalcedon (451) was gratefully acclaimed. “It is Peter who has spoken through Leo. This is what we all of us believe. This is the faith of the Apostles”, the 500 Council Fathers cried out in unison. It rejected the heresy of Eutyches who denied the true human nature of the Son of God, affirmed the union of both the divine and human natures in the one person of Jesus, without confusion or separation. This quotation expresses the true doctrine:

The proper character of both natures was maintained and came together in a single person. Lowliness was taken up by majesty, weakness by strength, mortality by eternity. To pay off the debt of our state, invulnerable nature was united to a nature that could suffer; so that in a way that corresponded to the remedies we needed, one and the same mediator between God and humanity, the man Christ Jesus, could both on the one hand die and on the other be incapable of death.

Thus was true God born in the undiminished and perfect nature of a true man, complete in what is his and complete in what is ours. By “ours” we mean what the Creator established in us from the beginning and what he took upon himself to restore. There was in the Saviour no trace of the things which the Deceiver brought upon us, and to which deceived humanity gave admittance. His subjection to human weaknesses in common with us did not mean that he shared our sins. He took on the form of a servant without the defilement of sin, thereby enhancing the human and not diminishing the divine. For that self-emptying whereby the Invisible rendered himself visible, and the Creator and Lord of all things chose to join the ranks of mortals, spelled no failure of power: it was an act of merciful favour.

Pastoral action
Leo knew how to make himself close to the people with his pastoral action and his preaching at a time when Rome was tried by famines, an influx of refugees, injustice and poverty. He opposed pagan superstitions and the actions of Manichaean groups. He associated the liturgy with the daily life of Christians:  for example, by combining the practice of fasting with charity and almsgiving especially during the Rogation or Ember Days, which marked the change of seasons.

Sense of liturgy
In particular, Leo taught – and his words still apply today – that the Christian liturgy is not the memory of past events, but the actualisation of invisible realities which act in the lives of each one of us. This is what he stressed in a sermon (cf. 64, 1-2) on Easter, to be celebrated in every season of the year “not so much as something of the past as rather an event of the present”. 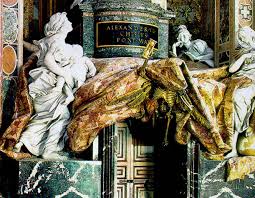 Pope Leo died on 10th November 461 and was buried near the tomb of St Peter. Today, his relics are preserved in one of the altars in the Lateran Basilica.