Summary: Martin of Tours Like St Ambrose of Milan, Martin was an army man who picked up the Christian ethos that had crept into the army through Constantine. Clovis, a century later, became a Christian through his wife Clothilde. Through them the story of France and the Franks is intertwined with that of the Church.

On one of his trips to France, John Paul II asked if it had been true to its baptismal vocation. Saint Martin of Tours and King Clovis had much to do with that baptism which has made many refer to France as ‘the eldest daughter of the Church’. 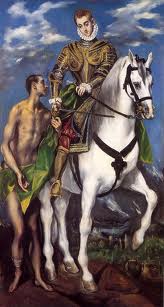 Martin, the son of a pagan, served in the Roman army and generously gave half  his soldier’s cloak to a beggar.  After a vision, he was baptised and visited what is now Hungary, Croatia and Italy, where, in Milan, he clashed with an Arian (heretical) bishop.  He founded the first monastery in Gaul and was one of the first monks ever to be made bishop (of Tours in AD 372).

Most bishops of Gaul had been drawn from those who were Roman Senators. They moved from being leaders in the civil sphere in the Church whereas Martin had a more profoundly religious background. He was tireless in his efforts to evangelise peasants who were still pagan and he established a rudimentary parochial system in his diocese. After his death in AD 397 his tomb became the focus of pilgrimages because of his reputation for sanctity. He is a patron saint of France.

Some eighty years after Martin’s death, the last Roman Emperor of the West was replaced by a chief from one of the barbarian tribes which had broken down the Empire’s defences.

Julius Caesar had written that Gaul was divided into three parts but shortly after the fall of the empire it was divided into seven parts because of tribal, dynastic and religious conflicts.

Most of the Germanic tribes which overran the territories inhabited by Gauls were Christian but heretical. They had been evangelised by Arians, who believed that as Christ suffered and died on the Cross he could not be the equal of God the Father.  In Arian societies, the king exercised authority even in Church matters.

Clovis and Clothilde
Clovis was a pagan Germanic chieftain with one sister who was likewise a pagan and another who was an Arian. His kingdom (of Franks), situated largely in what is now north-central France and Belgium, was smaller than the Arian kingdoms of the Visigoths in Burgundy and the Vandals of Provence and Spain who had the backing of the Ostrogothic kingdom of Italy and the Vandals of north Africa.

He could have become an Arian himself because, for a time, one of his sisters was married to Theodoric, the Ostrogothic king of Italy. However, his wife, Clothilde, a Burgundian princess, was a Catholic and she tried to convince him of the truth of the faith.

In AD 496 another German tribe attacked the Franks along the Rhine. They appealed to Clovis for help but he arrived late with his troops. They were on the verge of defeat when Clovis invoked the help of Clothilde’s God, vowing that if he were victorious he would be baptised. He was victorious.

Fear of rebellion
Historians used to claim that he accepted Catholicism immediately but, in fact, he did not fulfil his promise just then. Clothilde convinced him to take instruction from Bishop Remy of Rheims. Clovis did so in secret to avoid rebellion by his troops, who believed in the powerful God of war, Wotan, who was a winner rather than an apparent loser like Christ, who had died an ignominious death on a cross.

Still not persuaded to accept baptism, Clovis consulted with a former soldier, Vaast, who had become a hermit and mystic. The king was impressed by Vaast and made him his travelling companion for some time.

After being defeated twice by Visigoth forces near Bordeaux in A.D. 498, Clovis arrived at Tours on St. Martin’s feast day. There he was influenced by the many pilgrims, the cures which took place and the discussions he had with the priests of the sanctuary. After seven years examining the faith, he finally decided to be baptised.

Christmas baptism
He wrote to all the bishops of Gaul informing them that he was entering the second phase of the catechumenate. (the first phase was that in which the catechumen listened to explanations; the second insisted on a written request for baptism).

Usually baptisms took place at Easter but his was arranged for Christmas Day to signify the birth of a Christian king. It used to be considered that the year was AD 496 but now it is thought it was either AD 498 or AD 499.

One bishop who could not attend (because he lived under Arian-Gothic domination) wrote to Clovis saying, ‘your faith is our victory’. Some claim it must have required conviction and courage for Clovis to choose Catholicism when the adjoining kingdoms were Arian; others say it was a shrewd calculation for his own advantage. In any case, he was the first barbarian king to make the choice.

As a military chieftain he had been faithful to imperial Rome and now he was declaring his allegiance to Peter and Paul as representatives of Christ. The barbarians had already invaded Rome several times and the capital of the Roman empire had shifted to Constantinople but that was a long way away. To a large extent, Clovis was isolated.

Before his death in AD 511 he had resounding victories over the Arian kings but it was not until AD 536 that his sons conquered Provence, extending the Franks’ control to the Mediterranean. Clovis established his capital in Paris and built there a church dedicated to Saints Peter and Paul, which was evidence of his fidelity to Rome. 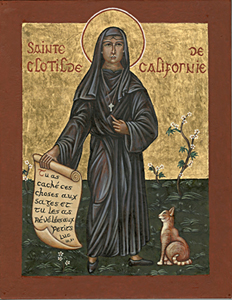 Faithful to Clothilde
Concubinage was practised by Germanic kings. They could have two free-women wives (the first was the official one with inheritance rights) and a third from among the slaves, but Clovis accepted Clothilde’s requirement of a monogamous marriage. (After Clovis’ death, Clothilde withdrew to St Martin’s sanctuary until her death in AD 548. She is now a canonised saint).

The Franks as a people did not automatically follow Clovis’ choice as did the people of the Kiev kingdom when Prince Vladimir was baptised there some 500 years later. In fact, when Clovis nominated Vaast as bishop in A.D. 500 he had a specific mandate to end the paganism which was still responsible for human sacrifice. It was not until much later that the French language fully replaced German and it was only in the 13th century that the kingdom of France was established.

Intertwined
So Clovis’ conversion did not mean that what is now France became Catholic. It was not a decision taken swiftly under the impulse of a military victory and involving a whole people. But it strengthened a Church which existed before the French nation and insured that the story of France and the Franks would be intertwined with that of the Church.

This article first appeared in The Messenger (December 1998), a publication of the Irish Jesuits.