Summary: Yesterday’s feast, the  ‘Solemnity of All Saints’ or ‘All Saint’s Day’ commemorates all those who are with God in heaven, while today’s All Souls’ Day, commemorates the faithful departed, those who are still being purified and have not yet reached heaven. 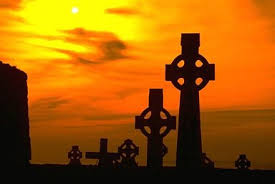 Today’s Commemoration of All the Faithful Departed, is an expression of the doctrine of the communion of saints. As traditionally explained, this doctrine means that each of the three divisions of the Church –
the Church Triumphant (all the saints in heaven), the Church Militant (all those still alive on earth) and the Church Suffering (all the souls in purgatory) can help the others by their merits and prayers.

Patrick Duffy explains some aspects of this feast.

Ritual surrounding death
In every culture death is surrounded with ritual. There is also a widespread belief that ritual and prayers can affect the fate of the soul of the dead person in the “world to come”. Christian ritual expresses what Christians believe about death, the resurrection of the body and what we call “life everlasting”. 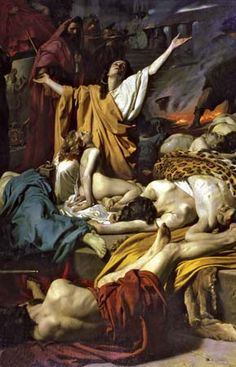 Old Testament background
In the Second Book of Maccabees, after some of his soldiers had been killed in battle, Judas Maccabaeus, had their bodies laid to rest among their relatives in their ancestral tombs. However, in the process he discovered that they had concealed amulets of idols under their tunics. As this was understood as a sinful act on their part, Judas decided to have a sacrifice for sin offered on their behalf in Jerusalem. For this he collected up to 2,000 drachmae and sent it to Jerusalem.
The text of 2 Macc 12:44-45 explains:”For if he had not expected the fallen to rise again it would have been superfluous and foolish to pray for the dead, whereas if he had in view the splendid recompense for those who make a pious end, the thought was holy and devout. This is why he had this atonement sacrifice offered for the dead, so that they might be released from their sin.”

Early Christian customs
In the early centuries, prayers for the dead were inscribed on the walls of the Roman catacombs where Christians were buried. Some Roman funeral customs were retained by the Early Church Burials once they were sure they were not incompatible with their faith. 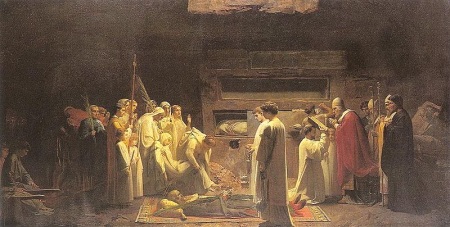 In the second century, prayers for the dead and celebrations of the Eucharist on the anniversary of a loved one took place. Initially these celebrations were on the third day after burial and the yearly anniversary. Later the seventh day, the thirtieth day and the fortieth day also became special days for commemorating the deceased person. These fixed days for the memorial of the dead with the Eucharist probably replaced the ancient sacrifices for the dead and sometimes perhaps the refrigerium, or memorial meal eaten at the graveside of the person.

Commemoration of all the faithful departed
The first mention of a day specially dedicated to commemorating all the faithful departed is found in a monastic rule attributed to Saint Isidore of Seville (died 636), who ordered his monks to celebrate the Eucharist for the souls of the departed on the Monday after Pentecost. The choice of this day may be due to the fact that the emerging feast of All Saints was celebrated on the Sunday after Pentecost, following some examples from the Christian East.

2nd November
In 998 St Odilo of Cluny set aside the day immediately following All Saints (2nd November) as a day when “the monks at Cluny would keep with joyous affection the memory of all the faithful departed who have lived from the beginning of the world until the end”. The custom spread to England and to Spain. In Valencia, the custom of saying three Masses was introduced by the Dominicans in the early 14th century. In 1915, during World War I, Pope Benedict XV extended the feast and the privilege of saying three Masses to the universal Church.

The doctrine of purgatory
The feast draws on the Catholic doctrine of Purgatory, which itself draws on the practice of praying for the dead. While the Church believes that all those who die in God’s grace and friendship can be sure of eternal life, nevertheless after death they undergo a purification to achieve the holiness necessary to enter heaven 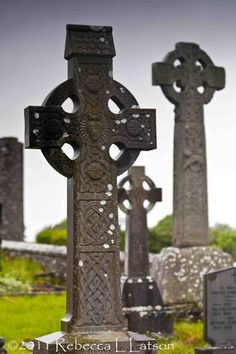 Popular piety
While encouraging various forms of popular piety in connection with this feast, such as visiting the graves of loved ones and praying for them, the Church warns against any semblance of ancestor worship, belief in reincarnation or divination. On the other hand, it sees this feast and popular customs connected with it as an antidote to the culture of denial of death in contemporary society. It also warns against all forms of “commercialisation of the dead”, which exploit the emotions of the faithful in pursuit of commercial profit. See the Directory on popular piety and the liturgy, paragraphs 256-260.