Summary: Today’s feast, the  ‘Solemnity of All Saints’ or ‘All Saint’s Day’ commemorates those who have gone before us and are now with God in heaven. ‘The ultimate object of veneration of the Saints is the glory of God and the sanctification of people by conforming their lives fully to the divine will and by imitating the virtues of those who were pre-eminently disciples of the Lord.’ (Directory on Popular piety and the Liturgy, 212. ,

Patrick Duffy explains the background and significance of the feast

The Solemnity of All Saints is probably of Eastern origin. In the early centuries Christians celebrated the anniversary of a martyr’s death for Christ at the place of martyrdom. In the early fourth century, following the persecution of Diocletian, martyrs became so many that a separate day could not be assigned to each and the Church assigned a common day for all, celebrated in the East on the first Sunday after Pentecost: there are homilies for this feast by St Ephrem the Syrian (373) and St John Chrysostom (407).

Development in Rome
In the West the Byzantine emperor Phocas (602-610) handed over to Pope Boniface IV (608-615) the Pantheon in Rome, originally built as a temple to all the Roman gods. On 13 May 610, Pope Boniface dedicated it as a church to St Mary and all the martyrs. But the anniversary was fixed for 1st November by Pope Gregory III (731-741) who consecrated a chapel to all the saints in St Peter’s Basilica.

In Ireland and England
The 9th century Irish Martyrology of Aengus (828-833) has a feast for All Saints on 1 November. The feast became known in England and Ireland as All Hallows, from which we get Hallowe’en (the evening before All Hallows). It also took on some of the characteristics of the Celtic feast of Samhain. (c/f  Féile na Samhna: an bhunchiall.)

Who is included?
The scope of the feast includes all those officially recognised as saints, those whose cause for canonisation has not yet been completed, like Matt Talbot, the Irish Martyrs, Cardinal Newman and Pope John XXIII. But it also includes those whose holy lives were known only to their family, friends or religious communities. 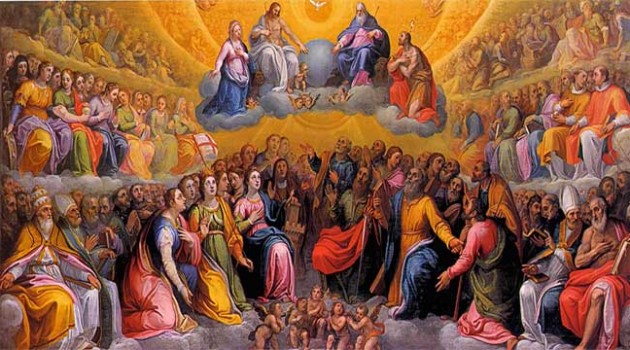 Chapter V of the Dogmatic Constitution on the Church Lumen Gentium of Vatican II is entitled “The Call to Holiness” and insists that the “(LG 40).all Christians in any state or walk of life are called to the fullness of Christian life and to the perfection of love”

A lot of people do not like large gatherings. They find big crowds exhausting. Today’s feast, however, is precisely about crowds of people. The first reading expresses it well, ‘a huge number, impossible to count, of people from every nation, race, tribe and language’. Today is the feast not just of a few chosen saints, but of all saints. Today we honour all the saints, those who are formally canonised and those who are not.

If our vision of humanity is shaped exclusively by the media we might be tempted to think that there are a lot more villains out there than saints. It is reassuring to be reminded by today’s feast that there exists a huge number of saints, impossible to count. In the words of the letter to the Hebrews, we are surrounded by a ‘great cloud of witnesses’. None of us can live as the Lord wants us to live purely on our own. We need the good example of others to inspire us and to show us what is possible. Today’s feast declares that we are surrounded by such a cloud of witnesses, if only we could recognise them. Some of these people have already passed beyond us and are now ‘standing in front of the throne of the Lamb’, in the words of today’s first reading. Many of them, however, are our companions on the journey of life. They do not look at all like the statues in our churches. They are very ordinary, yet they are also very special. These are the people we are grateful to have met and to have around.

The feast of All Saints encourages us to believe that any one of us could be part of that huge number, impossible to count. In that sense, today’s feast is about every one of us. John, in today’s second reading, is speaking about all of us when he declares that ‘we are already the children of God’, and that, in the future, ‘we shall be like’ God. We are all destined for sainthood. God intends that all of us would be conformed to the image of God’s Son. For most of us, that will only come to pass fully beyond this life. Yet, because we are already sons and daughters of God through Baptism, we are called to grow now towards that wonderful transformation that awaits us. The road to sainthood begins here, wherever we happen to find ourselves. In today’s gospel reading, Jesus shows us what that road to sainthood looks like. In the Beatitudes, Jesus painted a portrait of himself, the living saint par excellence. He was also painting a portrait of the person that we are all called to become. The Beatitudes give us different facets of the person of Jesus, while at the same time showing us different ways in which we might reflect the person of Jesus.
*********************************

This second Gospel reflection comes from WEEKDAY REFLECTIONS 2019-20: The Word of God is Living and Active  published by Messenger Publications  c/f www.messenger.ie/bookshop/