Summary: St Cedd was the eldest of four anglo-Saxon brothers (Cedd, Chad, Cynibil and Caelin), all of whom were trained by St Aidan of Lindisfarne and became monks and priests in 7th century England. Cedd and Chad became bishops and saints.

Differences between the Celtic and Roman model of organisation 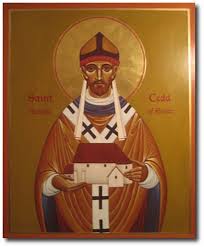 St Aidan came to Lindisfarne in Northumbria from the island of Iona in Scotland, bringing with him the Celtic way of doing Christianity. As well as superficial differences over the calculation of the date of Easter, and the cut of the tonsure, the Celtic church was organised around monasteries, with peripatetic monks/bishops exercising an apostolate in rural areas, while the European/Roman church model centred around an urban cathedral and subordinate parishes. 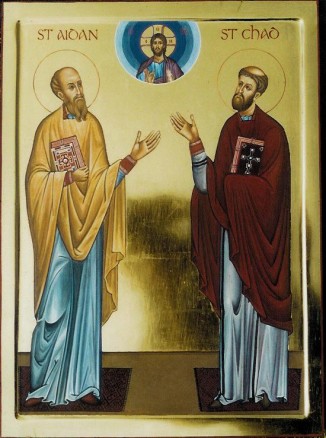 St Aidan on the holy island of Lindisfarne was said like Christ to have chosen twelve disciples including St’Cedd and Chad.

Cedd and Chad in the Celtic tradition
Aidan was well-known for his personal austerity and disregard for the trappings of wealth and power, so that Cedd and Chad absorbed his example and traditions. After the death of Aidan (651) Chad and other Northumbrians went to study with the Irish. Cedd was close to Aidan’s successor, Finan, so it is highly likely that he owed his entire formation as a priest and scholar to Aidan, Finan and to Lindisfarne.

Cedd’s mission to Mercia
In 653, King Oswiu sent Cedd with three other priests to evangelise the ethnic groups of Mercia, based in the mid-Trent valley. Peada, son of Penda, was sub-king of the Middle Angles. He had agreed to become a Christian in return for the hand of Oswiu’s daughter, Alchflaed, in marriage. Peada travelled to Northumbria to negotiate his marriage and baptism. This was a time of growing Northumbrian power, as Oswiu reunited and consolidated the Northumbrian kingdom after its earlier (641/2) defeat by Penda.

In Middle Anglia
Cedd, together with some other priests, accompanied Peada back to Middle Anglia and won a considerable number of converts of all classes. Although Bede in his Ecclesiastical History of the English People portrays the pagan Penda as generally sympathetic to Christianity, Cedd’s mission made little headway, since Bede credits Cedd’s brother Chad with the effective evangelization of Mercia more than a decade later. A merely benign attitude was not enough for Christianity to make progress among the general population; it needed positive royal backing, especially grants of land for monasteries.

To East Saxonia
Oswiu soon recalled Cedd from the mission to Mercia and sent him to the East Saxon kingdom, accompanied by one other priest. This was at the request of King Sigeberht to re-convert his people.The East Saxon kingdom had been originally converted by missionaries from Canterbury, with the Roman Mellitus as its first bishop in Essex in 604. But after a decade, he was driven out. The royal family were divided about Christianity: some were Christian, some pagan, and some wanted to tolerate both.

Baptisms of Sigeberht II and Swithelm
Bede tells us that Sigeberht’s decision to be baptized and to reconvert his kingdom definitively was on the initiative of Oswiu. In fact Sigeberht travelled to Northumbria to accept baptism from Bishop Finan of Lindisfarne. And Cedd seems to have gone to the East Saxons partly as an emissary of the Northumbrian monarchy and his prospects were helped by the continuing success of Northumbria, especially the final defeat of Penda in 655. 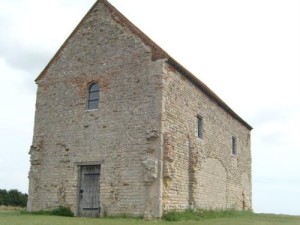 This Saxon Chapel of St Cedd was built in 654 astride the western wall of the Roman Fort of Othona.

Bishop of the East Saxons
After making some conversions, Cedd returned to Lindisfarne to report to Finan. In recognition of his success, Finan ordained him bishop, calling in two other Irish bishops to assist at the rite. Cedd was appointed bishop of the East Saxons. Cedd demanded personal commitment and was not afraid to confront the powerful. He excommunicated a thegn who was in an unlawful marriage and forbade Christians to accept the man’s hospitality. When Sigeberht continued to visit the man’s home, Cedd descended on their revels to denounce the king openly, foretelling that he would die in that very house. Bede asserts that the King’s subsequent murder (660) was his penance for defying Cedd’s injunction.

After Sigeberht’s death Cedd’s position in Essex became more tenuous. The new king, and murderer of Sigeberht, Swithelm, was a pagan. But persusded by other Christian kings, he accepted baptism from Cedd. Cedd founded monasteries in the Thames estuary at Tilaburg and Bradwell-on-Sea.

Abbot of Lastingham
Cedd also became abbot of the monastery of Lastingham in his native Northumbria at the request of the sub-king of Deira, Ethelwald, who was put in contact with Cedd by Caelin, Cedd’s brother. Cedd undertook a forty-day fast to purify the site, although urgent royal business took him away after thirty days and Cynibil took over the fast for him.

Cedd occupied the position of abbot of Lastingham to the end of his life, while maintaining his position as missionary bishop and diplomat, often far away from the monastery itself. His brother Chad was to do the same. Clearly Lastingham was regarded as a monastic base for the family of Cedd, giving them intellectual and spiritual support and a place of retreat. However, Bede makes clear that Cedd appointed others to have day-to-day care of Lastingham, and probably Chad did the same.

The Synod of Whitby
Cedd had been brought up in the Celtic Rite which had different form of the tonsure and method of calculating the date of Easter. These differences came to a head at the Synod of Whitby.

The proceedings of the council were hampered by the participants’ mutual incomprehension of each other’s languages, which probably included Gaelic, Old English, Frankish and Early Welsh, as well as Latin. Bede tells

us that Cedd was a conscientious interpreter for both sides. Cedd’s facility with the languages, together with his status as a trusted royal emissary, must have given him a key role as a go-between in the negotiations. When the council ended, he returned to Essex. According to Bede, he accepted the Roman observance of Easter, and returned to his work as bishop, abandoning the Celtic customs.

Death at Lastingham
A short time later, he travelled back to Northumbria, this time to the monastery at Lastingham, where he fell ill with the plague and died on October 26, 664. Bede records that a party of thirty monks travelled up from Essex to Lastingham. All but one small boy died there of the plague. Cedd was initially buried at Lastingham in an open-air grave, but his body was moved to a shrine inside the later stone church at the monastery. Chad succeeded Cedd as abbot at Lastingham.