Summary of St Colman, Bishop. he hailed from Kilmacduagh, County Clare in the seventh century. After studying in Aran, where he founded two churches on Inis Mhor, he returned to become a hermit near Kinvarra. Induced later to undertake the monastic life he made a foundation at Kilmacduagh. He is said to have been its first abbot and bishop and had a reputation for being a vegetarian and having a great love of birds and animals..

Early life on Inishmore
Colman was born at Corker, Kiltartan, County Galway, the son of an Irish chieftain Duach. He studied with Saint Enda at his monastic settlement on Inishmore, the largest of the Aran Islands, and lived there as a hermit in prayer and fasting. He himself founded two churches there near Kilmurvey. He later moved to a cave in the Burren in County Clare, bordering south Galway and close to what is today the village of Kilmacduagh.

Foundation at Kilmacduagh
In 610, along with a relative, King Guaire Aidne Mac Colmáin (d. 663) of Connaught, he founded the monastery of Kilmacduagh, and governed it as abbot-bishop. Kilmacduagh was erected as a diocese at the Synod of Kells in 1152. In 1751 it was united with the diocese of Kilfenora and in 1883 both these smaller dioceses were integrated into the united diocese of Galway, Kilmacduagh and Kilfenora.

Lover of birds and animals
Like other monastics, Saint Colman was a lover birds and animals. He had a pet rooster who woke him for the night office, a pet mouse he trained to prevent him going to sleep again and a pet fly he trained to mark the place in the manuscript service book where the service left off.

The site at Kilmacduagh

Today at Kilmacduagh there are the remains of five churches, a leaning round tower 112 feet high that was restored in 1880, and the remains of an abbot’s house. Saint Colman’s abbatial crozier had been used through the centuries for the swearing of oaths. Although it was in the custodianship of the O’Heynes of Kiltartan (descendants of King Guaire) and their relatives, the O’Shaughnessys, it is now kept in the National Museum in Dublin.

The site of  Kilmacduagh at eventime 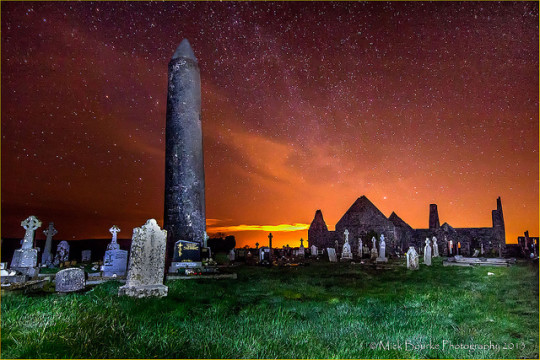