Summary: St Charles Borromeo, Bishop Born in Arona (Italy) in 1538; died on this day in 1584 in Milan, twenty-two years old when  appointed cardinal, secretary of state, and given the administration of the diocese of Milan by his uncle, Pius IV and prominent in the final sessions of the Council of Trent during 1562—1563.  Known for implementing the Council’s reforms in liturgy, education, presbyteral formation, and diocesan organisation. 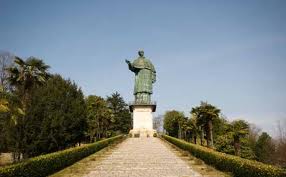 At Arona near Lake Maggiore in northern Italy there is a thirty metre high copper statue of St Charles Borromeo. It is possible to climb up and look out over the Lake through his eye sockets and ear holes. The statue is symbolic of the impact of this saint of the Counter Reformation made in the area. His care for the poor was unflinching and his reforms antagonised the higher levels of the corrupt Church.

Early life
Charles was born into a noble family at Arona on Lake Maggiore in northern Italy. His mother was Margaret de Medici, the sister of the future Pope Pius IV (Giovanni Angelo de Medici 1559-65). At the age of 21, he graduated from the University of Pavia with doctorates in canon and civil law. Appointed cardinal at 22 while still in minor orders, he was called to Rome to serve in the Vatican where he held several high offices. Soon after his arrival, as a distraction from more serious occupations, he founded a kind of literary soiré, which met nearly every evening; the literary contributions appear among the works of Charles as Noctes Vaticanae. As virtual secretary of state to his uncle, he played a prominent part in the final session of the Council of Trent (1562-3) and helped draft the Catechism it produced.

Choices and reform
At this point his brother died. This had a profound influence and made him ponder the choices facing him. As head of his family he was expected to marry. However, Charles declined this and chose to be ordained priest secretly at 24. A few months later he was appointed archbishop of Milan. At first, he thought of entering a monastery, but sensed God calling him to a pastoral role in the Church.

In 1566 he went to reside in Milan, being the first resident archbishop there for eighty years. He now adopted a simple life-style and set about a programme of reform. He energetically visited the 1,000 parishes, established seminaries, insisted on the moral reform of the clergy and the proper performance of the liturgy. He promoted the Confraternity of Christian Doctrine to ensure children were taught their faith. Colleges for lay students w 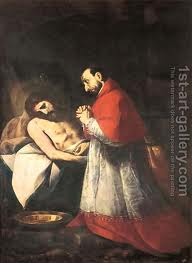 ere started and entrusted to the Jesuits. He generously endowed the English College in Douai. He developed a great devotion to the death of Christ.

Opposition and conflict
Charles reforming zeal met with vigorous opposition both from within the Church and from civil authorities. Because of his attempts to reform the 12th century order of the Humiliati, a priest of that order, Girolamo Donati, also known as Farina, made an unsuccessful attempt to assassinate him in 1569 while he was at evening prayer with his household. Despite the pleas of Charles for leniency, Farina and his accomplices were tortured and executed. The Humiliati were then suppressed. Despite Spanish (King Philip II’s) control in Lombardy at this time, Charles withstood all efforts to introduce the Spanish Inquisition into Milan. As a reformer, he suffered much from opposition, but he did not back down easily.

Relief during the plague
During the plague in Milan in 1570 and again in 1576 Charles organised relief-work and set up hospitals for the victims, but also personally took part in the work himself.

Apostolic work in Switzerland
In 1583 Charles was appointed apostolic visitor in Switzerland, where he had to deal with witchcraft and sorcery as well as the consequences of the teaching of Zwingli and Calvin. One of his last undertakings was the opening of a college in Ascona. 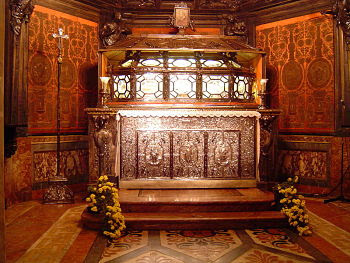 Worn out by his activity, Charles died at the comparatively young age of forty-six. His tomb is in the crypt of Milan cathedral. His contemporary, Cardinal Caesar Baronius, himself a holy man and a Church historian, called him “a second Ambrose, whose early death, lamented by all good men, was a great loss to the Church”. Pope Paul V canonised him in 1610.