Summary of Ss Simon and Jude, Apostles.
Simon “the Less” is also called “the Canaanite” and “the Zealot.” Jude “(son) of James” (Luke 6:16; Acts 1:13) was traditionally identified as Jude, brother of James and author of the letter of Jude, but may also be the one called “Thaddeus” (Matthew 10:3; Mark 3:18).  A tradition has Simon and Jude preaching and being martyred in Persia. Honoured among the twelve apostles, the first followers of Christ. (Jude is the Patron saint of hopeless causes.) 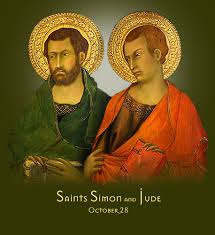 Saints Simon and Jude went together as missionaries to Persia, and were martyred there, according to St Venantius Fortunatus, a poet and bishop of Poitiers in the sixth century. This may explain why so little is known about them and also why they are usually put together.

Patrick Duffy summarises traditions about them.

New Testament lists
In the various New Testament lists of the twelve apostles (Mt 10:2-4; Mk 3:16-19; Lk 6:14-16; Acts 1:13), the tenth and eleventh places are occupied by Simon the Zealot (also called Simon the “Cananean,” the Aramaic word meaning “Zealot”) and by Judas of James, also called Thaddaeus or Lebbaeus. 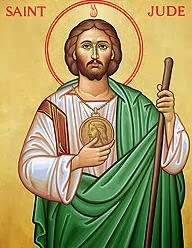 Jude
Jude is often, in popular usage, known as the patron of desperate causes, the “saint of last resort“, the one you ask for help when all else fails. We may wonder what this is about.

Jude is so named by Luke in his Gospel and in Acts. Matthew and Mark call him Thaddeus. He is not mentioned elsewhere in the Gospels, except of course where all the apostles are mentioned. Scholars hold that he is not the author of the Letter of Jude.  Evidently because of the danger of a mixup and due to he disgrace of the named Judas Iscariot  his name was shortened to “Jude” in English.

Simon
Simon is not mentioned by name elsewhere in the New Testament but he is  mentioned on all four lists of the apostles. Some modern writers have used his surname “the Zealot” as a basis for conjectures associating him, and through him perhaps even Jesus, and his original followers, with the Zealot movement described by Josephus, a Jewish independence movement with a somewhat  terrorist streak.  The Zealots were a Jewish sect that represented an extreme of Jewish nationalism. For them, the messianic promise of the Old Testament meant that the Jews were to be a free and independent nation. God alone was their king, and any payment of taxes to the Romans—the very domination of the Romans—was a blasphemy against God. No doubt some of the Zealots were the spiritual heirs of the Maccabees, carrying on their ideals of religion and independence.

Some unlikely people
Jesus chose some unlikely people as disciples: a former Zealot, a former (crooked) tax collector, an impetuous fisherman, two “sons of thunder” and a man named Judas Iscariot, who was to betray him. It shows that holiness does not so much depend on human merit, but on God’s creation, call and gift.