Summary A curt summary of the life of Dominic Collins would say: Born in Youghal, Co. Cork in the year 1566, left for France in 1586,returned to Ireland in 1601 as a Jesuit brother, brought back to his native town and hanged on 31 October 1601.

Here we have the bare statistical bones of a life which was full of variety, of adventure and which, in spite of the 400 years since his death, still has interesting issues to be looked at in 2007.

Senan Timoney SJ describes how in the life of Dominic Collins, from boyhood to soldier to religious life to death, each decision seemed to lead on to the next inexorably. 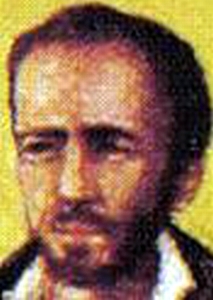 All through his life, Dominic made a succession of decisions which were life-changing and all of this in a period of thirty-six years. Youghal in the 1560s was a prosperous town – a trading town with a good harbour for fishermen and for cross-channel commerce. Dominic’s father and brother both served as mayors of the town.

For about two years, when Dominic was twelve years old, two Irish Jesuits ran a school in the town which Dominic may well have attended. He would certainly have heard the name `Jesuit’. He later said that his education was inadequate and regretted that the rebellion of the Earl of Desmond in 1579 not only forced the closure of the school but also affected the prosperity of the town, many buildings of which were destroyed.

What was a young man of twenty to do with his life if the prospects at home were poor? He thought of a military career and so, set sail for France, landing south of Brittany. 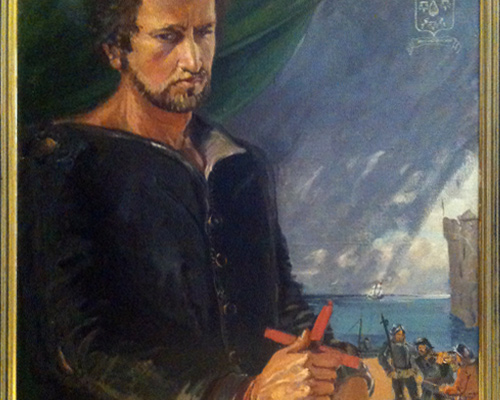 Duke of Mercoeur
He had good health, was well-built and had ambition. He felt he was officer material but if he was to join the cavalry he needed a horse. He decided to go to work in an inn in order to raise the money. Over some three years he earned enough money to buy his way into the army of the Duke of Mercoeur which was fighting on the side of the Catholic League.

Dominic rose in the ranks to become captain. He went on to become governor of an area near Lapena in Brittany and when, after nine years of military service, he decided to leave the army, he was granted a pension of twenty five crowns a month by King Philip II of Spain.

This Spanish connection brought him to the naval base at Coruna in north-west Spain which had strong ties with Ireland. What was he to do now? He happened to meet a Jesuit – Father Thomas White – a native of Clonmel who had come from Santiago to hear the confessions of Irish soldiers in the fleet during Lent of 1598. Dominic spoke to him about the next stage in his life.

Jesuit vocation
For nearly a year he had felt a disturbing desire to change his lifestyle but didn’t know what to do. He was happy to meet someone from home who was also a Jesuit – Clonmel and Youghal are less than fifty miles apart. The two men talked and Dominic expressed a desire to become a Jesuit. Fr White demurred. He recognized Dominic’s good will but given his lack of formal education he doubted if he would be accepted as a novice destined for priesthood. He could become a Jesuit brother but would this suit an officer of cavalry? Dominic replied that to become a Jesuit was his aim and the status of brother rather than priest did not disturb him.

When the Provincial or superior of that region was contacted, he too was slow to accept him. There was a certain doggedness about Dominic. He wrote several letters from Coruna to the Provincial and eventually he was told to come to the Jesuit College in Santiago. His vocation was to be tested. Would he suit the Jesuits and would the Jesuits suit him? Providentially a plague which struck seven members of the Jesuit community served as an occasion for Dominic to prove his mettle.

Others fled the danger but he stayed and served the sick for two months. He had come through the test and was admitted to the novitiate. There is a report extant which describes him at this time as a man of sound judgement and great physical strength; mature, prudent and sociable, though inclined to be hot-tempered and obstinate – no plaster saint! Two years later he pronounced his vows of poverty, chastity and obedience in the Society of Jesus. This was the expression of his commitment to Christ and his dedication to the spread of Christ’s kingdom. The year was 1600 and Dominic might well have expected to be sent to a house of the Society in the area. But No!

To be sent, to be missioned is of the essence of being a Jesuit. A request came from another Irish Jesuit, Father James Archer, that Dominic should accompany the Spanish fleet being sent by the new King of Spain, Philip III, to the help of Hugh O’Neill and Red Hugh O’Donnell in their attempt at revolution.

His superiors agreed to the request and so, at the age of thirty-five, Dominic was to return home to Ireland not as a soldier but as a religious who knew the needs of soldiers. The fleet set sail on 3 September 1601 in two squadrons. The smaller part of the fleet to which Dominic was assigned ran into bad weather and was delayed, eventually reaching Castlehaven in west Cork on 1 December, the main squadron having reached Kinsale more than two months earlier.

Debacle
It was not clear if Dominic himself reached Kinsale but he certainly accompanied O’Sullivan Beare in his retreat from the debacle of Christmas Eve in Kinsale. Eventually O’Sullivan Beare’s group, numbering 143, having waited in vain for the Spanish, had retreated into Dunboy Castle near Castletownbere and were surrounded on land and sea by a 4,000-strong besieging army of Sir George Carew, president of Munster.

On 17 June the bombardment of the castle began and continued all day with devastating results. Dominic, as a religious, helped the many wounded and dying. Just after sunset, he appeared at the entrance of the castle to see if he could arrange an honourable ceasefire. This was refused.

Next day, Thomas Taylor, the new Irish commander in place of McGeoghegan who had been mortally wounded, sent word that the remaining seventy-three survivors were willing to surrender. Seventy of them were brought to the market-place and hanged. Three of them, Taylor, MacSwiney and Collins, were spared, but not for long. They were brought to Cork city for interrogation. The first two were soon executed.

military importance. However, Carew felt that if he could get Dominic to change his religious allegiance, this would be a great propaganda victory. For over three months Dominic was tortured and promised preferment if he yielded. He had little if any human support, despondency prevailed and a visit from his family, who urged him to consider his position, was disheartening to say the least of it. One thing is clear: he was a man of resolve. He had given his word to God in his vow ceremony that he would be faithful to his promise, and it is very clear that throughout his life he was a man who made decisions and lived out their consequences. He is a man for our times.

His interrogation took place in Cork but his place of execution – for that was his fate – was to be his home town of Youghal. On 31 October 1602 he was marched through the town to the place of execution. No doubt many onlookers were eager to see their fellow townsman again after some fifteen years.

Dominic addressed the crowd in a mixture of Spanish, Irish and English, telling them the reason for his execution. Such were the effects of his words that the hangman refused to do his work and the soldiers had to get a fisherman whom they seized, to do the job. Dominic’s final words were
‘Into your hands I commend my spirit’.
In the words of G. M. Hopkins: ‘Thee, God, I come from, to thee go’.