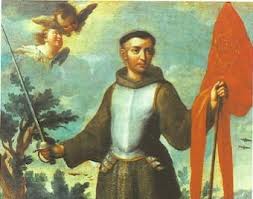 John married the daughter of a Perugian nobleman but as his marriage had not yet been consummated he had it anulled so that he could enter the Franciscans of the Strict Observance at Perugia..

John saw orthodox preaching and good living by priests as the planks of the reform process that had just begun with the Council of Trent.

According to the Martyrology of Tallaght, Fintan of Clonenagh had the name of being the "hard man" among the Celtic abbots.

His spirituality drew its power from meditation on the passion of Jesus as expressing the great love of God.

The Iroquois indians seized Brébeuf and his fellow Jesuit Gabriel Lallemont and tortured them - by scalping, mock baptism with boiling water - until they died.

There is a Christian tradition, especially strong in Eastern Orthodoxy, that Luke was the first iconographer

On his way to Rome, Ignatius's only fear was that the Romans might find a way to stop his martyrdom.

Although the monks of Luxeuil elected Gall as their abbot and a local king, Sigebert, offered him a bishopric, he declined both and chose to remain a humble hermit.

Summary: St Gerard Majella, a young 18th century Italian who ‘eloped’, so to speak, in order to join the Redemptorists. St Gerard Majella, one of Ireland’s best-loved saints, known here particularly as the mothers’ saint. He was canonized [...]

Summary: ‘Nada te turbe’ – popularised by a Taizé chant means, “Let nothing disturb you“. This a Spanish saying and was the motto of Teresa of Avila, Carmelite reformer and mystic. She founded the reformed (“discalced”) Carmelites and in spite of much [...]

A story of Teresa of Avila

‘There’s a lovely story told about the life of Saint Teresa, one handed down to us by tradition. Bishop Philip Boyce of Raphoe retells us .

‘One day as Teresa was making her way along the corridor in [...]

Summary of  St. Wilfrid was the strong man of the Anglo-Saxon Church. Educated by the Celtic monks at Lindisfarne, he went to Rome and strongly upheld the Roman way of computing Easter against the Celtic monks at the Synod of Whitby (664). Wilfrid also preached at [...]

St. Canice good humour and readiness to help won him many friends and helpers in preaching the Good News.

Summary of St John XXIII, Pope. Angelo Giuseppe Roncalli (1881-1963), born in Sotto il Monte in Lombardy, was ordained priest in 1904 and served (among other places) as nuncio in France, before becoming Patriarch of Venice. He served as pope from 1958 to 1963 and in his final [...]

Comboni made efforts (and had some small success) in combatting the slave trade in the region but, this was deeply embedded.

Summary: John Henry Newman: Born: 1801 Died: 1890) ordained an Anglican priest and later a Catholic priest and cardinal, rector of CUI 1854-58, an important and controversial figure in the religious history of England in the 19th century.

Pelagia came into the church where Bishop Nonnus was preaching and hearing what he said, wept tears of repentance.

Legend attributes the origin of the Rosary as a method of prayer to St Dominic. It was promoted as a kind of lay person's Divine Office, the 150 Hail Marys replacing the 150 psalms.

Although never formally canonised, Bruno's cult was approved for the Carthusians in 1514 and extended to the universal Church in 1623.

Francis saw the icon of Christ say to him three times: "Francis, Francis, go and repair my house which, as you can see, is falling into ruins."

Summary: Abbot Columba Marmion was a priest of Dublin diocese who became a Benedictine monk and eventually abbot at Maredsous, Belgium. He was beatified in 2000. His writings, especially his Christ the Life of the Soul, show the reader how to become transformed into Christ.

Columba wrote three significant works of very positive spiritual theology: Christ, the life of the soul (1918), Christ in his mysteries (1919) and in 1922 Christ the ideal of the monk.

God has commanded his angels, to keep you in all your ways. They shall bear you upon their hands, lest you strike your foot against a stone....(Mt 18:10)