Summary: St Martin de Porres, Religious Born in Lima (Peru) in 1579, an illegitimate child of mixed race; died there on this day in 1639. Trained as a barber and infirmarian and  accepted as a Dominican brother. He was noted for his humility, holiness, his ministry to African slaves, and his dedicated service of the poor and the sick of all races. 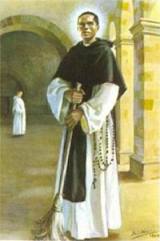 St Martin suffered discrimination because he was “illegitimate” and of mixed race. But he overcame all these issues with an extraordinary charity that won over the hearts of people of all races and classes.

Patrick Duffy tells us his story.

Early life
Martin was born in Lima, Peru. His father was a Spanish noble man and his mother a freed black slave from Panama. He inherited his mother’s African features. His father virtually disowned him, though he did take him and his sister to Ecuador to be educated. After his father’s appointment as governor of Panama, both children were sent back to their mother in Peru. She practised herbal medicine and Martin picked up that knowledge from her. He also became apprenticed to a barber, which at that time meant he also picked up some surgical expertise.

Although “Indians, blacks and their descendants” were barred from becoming religious, Martin was accepted by the Dominicans as a ‘donado’, (a lay person allowed to live with the community and wear the habit in return for performing menial tasks).  But Martin had such gifts of healing that he soon had a reputation as miracle-worker. Also in distributing food from the convent to the poor, the food seemed to multiply miraculously. He set up a residence where he nursed the sick, befriended the poor, especially ill-treated slaves. He also had an orphanage, and set up a shelter for stray animals to whom he was extremely kind. He was eventually accepted as a lay brother.

Filled with compassion
Martin’s Dominican superiors and brothers were often shocked by the extent of his charity. One of his brothers saw him take a half-naked beggar, dirty and covered with ulcers and put him in his own bed. Thinking this

was too much, he reproved Martin, who replied: “With a little soap I can easily clean my bed covers, brother, but even a torrent of tears would never wash from my soul the stain that my harshness towards this poor man would create.” In this way he won over his brothers to his way of thinking and eventually many came to him for spiritual direction. Martin never ate meat, fasted continuously, and spent much time in prayer and meditation. 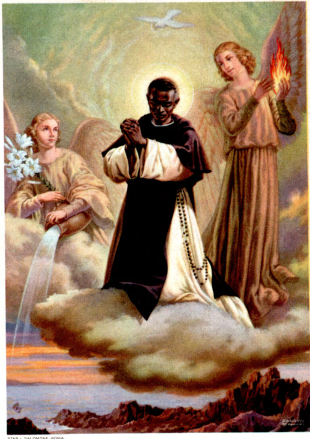 After many years of loving service, Martin fell ill and died aged sixty. Confounding distinctions of class and race, bishops and nobles turned up to carry his body to his grave. Miraculous cures were claimed at his tomb, but it was 1837 before Pope Gregory XVI beatified him. Pope John XXIII canonised him in 1962. There is a widespread devotion to St Martin, who is regarded as the patron saint of those who suffer discrimination, of people of mixed race, and also of barbers, hairdressers and social workers.