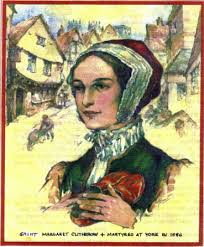 Anne’s date of birth is unknown, but she was the second daughter of Willam Heigham of Essex, a strict Calvinist, and was, together with her brother William, disinherited for converting to Catholicism. Some time before 1586, she married Roger Line, a young Catholic, who had been disinherited for the same reason. Roger Line and young William Heigham were arrested together while attending Mass, and were imprisoned, fined, and finally banished. Roger Line went to Flanders, where he recived a small allowance from the King of Spain, part of which he sent regularly to his wife until his death around 1594.

Around that time Fr John Gerard opened a house of refuge for hiding priests and put the newly-widowed Anne Line in charge of it, despite her ill-health and frequent headaches. By 1597 this house had become insecure, so another was opened, and Anne Line was, again, placed in charge. On 2 February 1601, Fr Francis Page was saying Mass in the house managed by Anne Line, when men arrived to arrest him. The priest managed to slip into a special hiding place, prepared by Anne, and afterwards to escape, but she was arrested, along with two other laypeople. 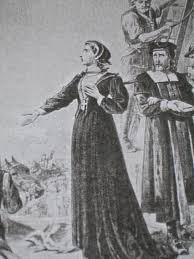 The old Bailey Trial
Tried at the Old Bailey on 26 February, she was so weak that she was carried to the trial in a chair. She told the court that so far from regretting having concealed a priest, she only grieved that she “could not receive a thousand more.” Sir John Popham, the judge, sentenced her to hang the next day at Tyburn.

Anne Line was hanged on 27 February 1601. She was executed immediately before two priests, Fr. Roger Filcock, and Fr. Mark Barkworth, though, as a woman, she was spared the disembowelling that they endured. At the scaffold she repeated what she had said at her trial, declaring loudly to the bystanders: 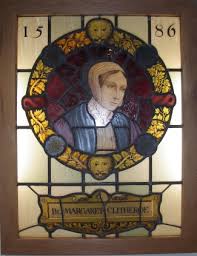 “I am sentenced to die for harbouring a Catholic priest, and so far I am from repenting for having so done, that I wish, with all my soul, that where I have entertained one, I could have entertained a thousand.”

Fr. Barkworth kissed her hand, while her body was still hanging, saying, “Oh blessed Mrs. Line, who has now happily received thy reward, thou art gone before us, but we shall quickly follow thee to bliss, if it please the Almighty.”