Summary of St Edward the Confessor. One could be forgiven for detecting a whiff of ideology in the promotion of some saints to canonisation and perhaps St Edward  is one of these. Edward’s cause was promoted by King Henry II as he had both Norman and Anglo-Saxon background. He is the patron saint of kings, difficult marriages, and separated spouses. 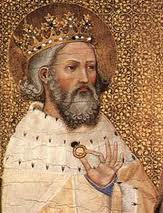 dward was born around 1003, the son of the Anglo-Saxon King Ethelred the Unready. His father’s nickname, “the Unready”, is from an Anglo-Saxon word which can mean both “good counsel” and “no counsel”. And there is certain rightness about it. Edward was the son of Ethelred’s third marriage to Princess Emma of Normandy.

Edward was crowned King of England. Elected by popular acclamation, Edward (known as “the Confessor” for his piety) had Norman sympathies.

A foot in many camps
When in 1015 the Danish King Canute invaded England, his mother Emma took flight with Edward and his brother Alfred to Normandy where he developed a familiarity with Normandy and its leaders. But after her husband’s death, Emma returned to England and in her second marriage became Canute’s consort during the Danish rule in England. After Canute’s death and the death of his sons, the Anglo-Saxon lay and ecclesiastical nobility invited Edward back to England in 1041; and he became king in 1042.

Favouritism of the Normans 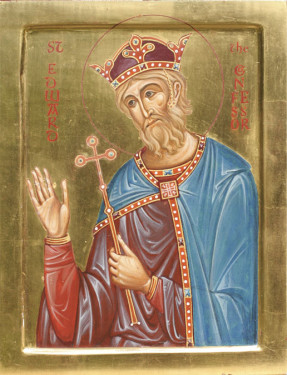 Edward’s favouritism of the Normans and especially his appointment of the Norman Robert of Jumieges as bishop of Canterbury frustrated the Anglo-Saxon nobles. So there remained Anglo-Saxon resentment during his reign led by Godwin of Wessex.

Edward’s marriage
To forestall this and bring Norman and Anglo-Saxon together, Edward married Godwin’s daughter, Edith, in 1045. It was said that he and his wife were so ascetic that they lived together as brother and sister. Certainly the union was childless. So it was no surprise that, on Edward’s death, Godwin’s son Harold was proclaimed king. William of Normandy then invaded to lay his claim to the English throne (1066). It is said that Edward may have named both Harold and William to succeed him. 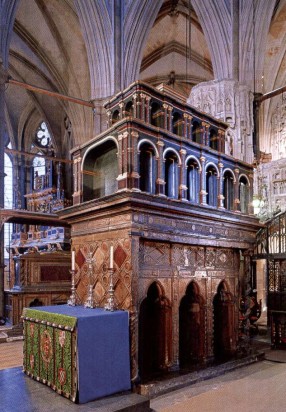 Reputation for holiness
Edward was reputed to have been accessible to his subjects and generous to the poor. One story tells that he caught a servant stealing from him three times and three times let him away with it, saying: “He needs the gold more than I do”. He was also said to have had the cure of scrufola “by the king’s touch”. He played a major role in building Westminster Abbey and was buried there himself.

Campaign for canonisation – to authenticate Henry II
Others, however, say that his reputation for sanctity owes more to the campaign for his canonisation used to gain popularity by Henry II and written up by the monk of Wesminster Abbey Osbert de Clare. Edward’s Anglo-Saxon and Norman background would have been seen as advantageous in authenticating the status of Henry II, who was Norman, but lacked Edward’s Anglo-Saxon pedigree. Henry successfully secured this canonisation from Pope Alexander III in 1161 by supporting him against a Ghibelline antipope Victor IV. Aelred of Rievaulx preached at the solemn translation of his relics on 13 October 1163.