Summary: St Faustina, a Polish nun, had a very intimate relationship with Jesus and was entrusted by him with the mission of Divine Mercy, a devotion which Pope John Paul II helped promote with her beatification and canonisation. 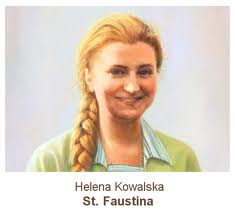 Helena Kowalska was born of a poor peasant,but religious, family near Lodz in Poland on 25th August 1905. She was the third of ten children and was baptised in the local church of Ðwinice Warckie. An obedient child, she showed a love of prayer, sensitivity to the poor and a great desire to be a saint.  She spent only three years at school, then worked as a domestic servant to support herself and her parents.

At twenty she tried to enter several convents in Warsaw and was rejected at first, but finally she was accepted into the Congregation of the Sisters of Our Lady of Mercy, taking the name of Maria Faustina.

Humble duties
In different convents of this order throughout Poland Maria Faustina was put to perform very ordinary duties – cook, gardener and doorkeeper –  she suffered from poor health. Externally nothing revealed her childlike trust in God, her rich prayer life with Jesus and the mystical graces she received.

Vision
On February 22, 1931, Jesus appeared to this simple nun, as we read in her Diary: In the evening, when I was in my cell, I became aware of the Lord Jesus clothed in a white garment. One hand was raised in blessing, the other was touching the garment at the breast. From the opening of the garment at the breast there came forth two large rays, one red and the other pale. In silence I gazed intently at the Lord; my soul was overwhelmed with fear, but also with great joy. After a while Jesus said to me: “Paint an image according to the pattern you see, with the inscription: Jesus, I trust in You”. 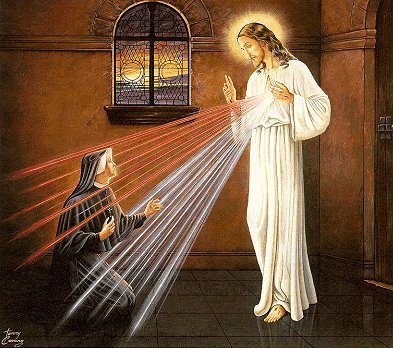 Mission
Jesus asked her to dedicate her life to make God’s mercy known to every human being and entrusted her with a mission of mercy, which consisted of three tasks: 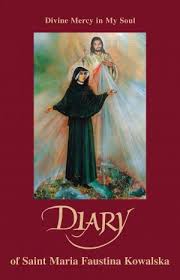 Faustina’s life in the convent was filled with extraordinary gifts: revelations, visions, hidden stigmata, sharing in the passion of Jesus, bilocation, the reading of human souls, the gift of prophecy, and the rare gift of mystical engagement and marriage. These are recorded in her Diary, kept faithfully in obedience to Jesus and her spiritual director. Jesus, she tells us, appointed her Secretary of his mercy.

‘As Secretary of my most profound mystery, know that your task is to write down everything that I make known to you about my mercy, for the benefit of those who by reading these things will be comforted in their souls and will have the courage to approach me‘ (Diary 1693).

Illness, death and influence
Diagnosed with tuberculosis in 1936, she accepted her sufferings as a voluntary sacrifice for sinners and died in Krakow in 1938 at the age of just 33.

Devotion to the Divine Mercy spread in Poland, but since the Diary was filled with misspellings, bad punctuation and poor sentence structure, Vatican theologians could not make much sense of it and, judging the devotion heretical, had it suppressed in 1958.

In 1965 Archbishop Karol Wojtila, archbishop of Krakow, had a corrected edition of the Diary sent to Rome. This led to her cause for canonisation being accepted. 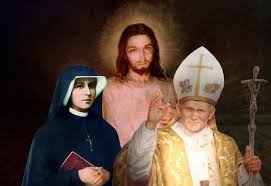 Coincidences?
Pope John Paul II beatified her in 1993 and canonised her in 2000, on both occasions on the second Sunday of Easter, the very day requested by Jesus as Mercy Sunday when he appeared to Faustina.

Strange also that it was on the eve of this feast that Pope John Paul II died – just after the Mass of the day had been celebrated at his bedside.