Summary: ‘Nada te turbe’ – popularised by a Taizé chant means, “Let nothing disturb you“. This a Spanish saying and was the motto of Teresa of Avila, Carmelite reformer and mystic. She founded the reformed (“discalced”) Carmelites and in spite of much opposition saw her reforms through.
Patrick Duffy tells her story. 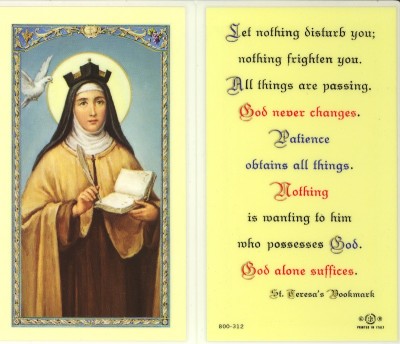 Early life
Born into a wealthy family in Avila, Spain, the third of nine children, Teresa had a happy childhood. Her mother died when she was fourteen and she claims she went a bit wild after that – reading romances and other teenage frivolities!

Religious life
Religious life seemed to offer more freedom than marriage, obedience to a husband and childbearing, so Teresa joined the Carmelite Convent of the Incarnation in Avila, where she lived a regular and fairly comfortable life. She was hit by a severe illness for about three years and for fifteen years after her recovery, she says she was in a somewhat divided state until in 1555 she experienced what she called her “second Conversion”.

Second conversion
Teresa felt that in a large community of around 180 nuns, many of whom had their servants, distractions were many, making a deep spiritual life difficult. Reform was in the air at this time with the founding of the Jesuits. Teresa envisaged a small community of about 12 living and doing penance in strict enclosure and returning to the ideal of poverty lived by the original mendicants, Francis, Dominic and the original Carmelites.

Discalced
One expression of this was that her nuns wore sandals as distinct from shoes and socks and were called “discalced”. Against some opposition, though she got support from King Philip II, she opened her first discalced convent of St Joseph’s in Avila in 1562.

Approval
In 1567 the Carmelite prior general approved her foundation and encouraged her to open two more convents for women and two for men. The “calced” Carmelites resented her reforms. They captured and imprisoned her firend and ally John of the Cross. This quarrel continued until in 1580 the Discalced Carmelites were given a separate province. Although her health was broken, Teresa continued her travels for reform until her death in 1582

Her writings and influence 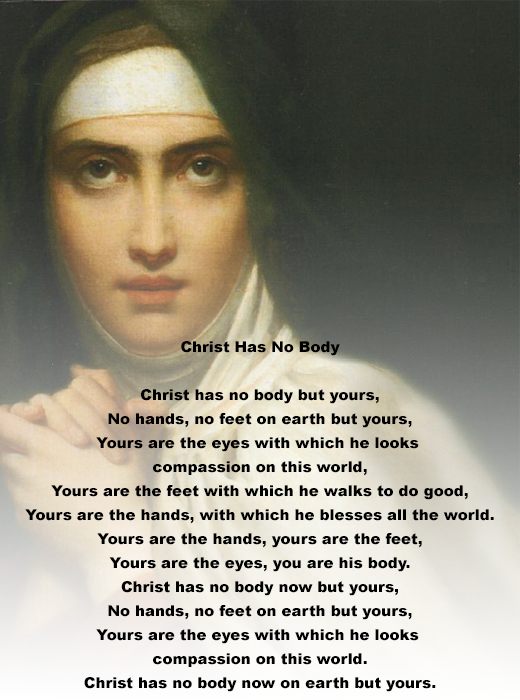 Teresa’s writings include her bestselling Autobiography and two mystical classics, The Interior Castle and The Way of Perfection, as well as many letters. Because she lived what she wrote, she is as popular with lay people as she is with religious and theologians. She loved poetry

She was canonised in 1622 along with Ignatius Loyola, Francis Xavier, Philip Neri and Isidore the Farmer.