Summary of St Francis of Assisi, Religious Born in Assisi (Italy) in 1181 or 1182; died nearby on 3 October 1226. The carefree son of a wealthy merchant who gave up his inheritance to embrace utter poverty. Under a simple gospel rule, he and his Friars Minor were authorised to be mendicant preachers. Pope John Paul II declared him patron saint of the environment.

Young man about town
Francis was one of seven children of cloth merchant Pietro di Bernardone and his French wife Pica Bourlemount. While his father was on a business trip in France, Pica gave birth to a boy whom she called John – a good religious name – but Pietro on returning called him Francesco – in his appreciation of all things French – and it stuck. Francis grew up to an easy life. He was a young man about town, popular and attractive, loved singing, partying and fine garments. When he was twenty, he joined the men of Assisi in a military expedition against Perugia, was captured and spent a year as a prisoner of war.

Spiritual crisis: meeting with a leper
Returning to Assisi and his care-free life, a serious illness in 1204 sparked a spiritual crisis. On recovery, Francis dreamed of becoming a knight in the Crusades and left to join the papal forces as a soldier. But on his way he had a strange vision where a voice told to “follow the master, not the man”. He returned to Assisi and for a time tried to work in his father’s clothing business. But he spent a lot of time on his own. One day he met a leper and although terrified at first, he went up to him, offered him money and gave him the kiss of peace. This was an incident he cherished all his life.

“Repair my house“
Soon after this, while praying in the ruined church of San Damiano just outside Assisi, Francis saw the icon of Christ crucified come alive and say to him three times: “Francis, Francis, go and repair my house which, as you can see, is falling into ruins.” So he sold his horse together with some cloth from his father’s store, and went to help the priest repair the church.

Renouncing his inheritance
His father Pietro was furious and took Francis to Bishop Guido of Assisi. The bishop said Francis should repay the money. But Francis’s response was to strip himself naked and hand back all his fine garments to his father. “From now on I will call God my father,” he said, renouncing his inheritance. From then on he lived as a beggar in Assisi, working manually at restoring three churches.

Life of poverty
In one of these churches, the Portiuncula he heard the reading about Jesus sending out the disciples without money, or two tunics, or sandals or staff and saw this as his vocation. So keeping only a rough shepherd’s tunic, he devoted himself to a life of poverty, preaching repentance on the streets of Assisi. People mocked him, but they were also fascinated by what he was doing. 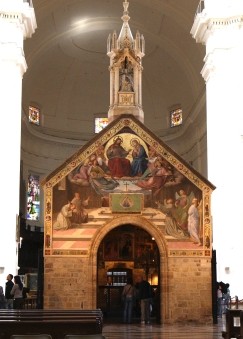 The Portiuncula
Portiuncula means “a small portion” and refers to a little piece of land outside the town given to Francis by the Benedictines. Here he repaired the chapel and it became his favourite place. A huge basilica – St Mary of the Angels – has since been built over it.

“Lesser Brothers”
Companions soon joined Francis. Within a year he had eleven. He chose not to be ordained a priest, and the community lived as fratres minores (or “lesser brothers“). They lived a simple life together in poverty, but also went preaching through Umbria, singing cheerful songs, but making a deep impression on their hearers.

Papal approval
In 1209 Francis brought his companions to Rome to seek permission from Pope Innocent III (1198-1216) to found a new religious order. Innocent refused at first, but that night had a dream of a crumbling church being held up by a poor man. So next day he called Francis and gave his verbal approval to the “lesser brothers”. From then on great numbers joined. 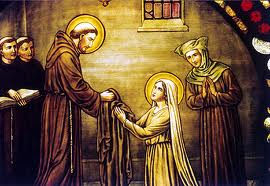 Francis,Clare and the second order
Around this time a wealthy young woman heard Francis preaching in the church of San Rufino in Assisi. Clare of Assisi was deeply touched by his message and wanted to follow the same vocation. Francis cut the golden tresses of her hair at the Portiuncula and then some of the brothers escorted Clare to a nearby female Benedictine monastery. Her sister Caterina joined her and there followed an intense confrontation with their family. Clare won out and soon set up her own community of Poor Ladies in the Church of San Damiano in Assisi. This second order eventually came to be called the Poor Clares.

Travels and universal dialogue
Francis’s dreams of going of a crusade had now changed to wanting a universal peaceful dialogue, even with heretics and especially with the Saracens. He left for Jerusalem, but, shipwrecked by a storm on the Dalmatian coast, he had to return to Italy. A few years later he sailed for Morocco, but this time only got as far as Spain. Illness forced him back again to Assisi.

Meets the Sultan in Egypt and goes to the Holy Land
Eventually in 1219 Francis sailed with a few companions to Damietta in Egypt, where he addressed the Sultan. The Sultan allowed him to preach and then go on to the Holy Land, where he visited all the holy places. There has been a Franciscan presence in the Holy Land ever since.

Organisation
As the order expanded, it needed organisation. At a Chapter held in 1217 it was divided into provinces and after this friars left for Germany, France, Hungary, Spain and Morocco. On Francis’s return from the Holy Land in 1220, he resigned the leadership. Brother Pietro succeeded him at first but soon died, then Brother Elia took over.

The first Christmas crib at Greccio
Francis is the originator of the Christmas crib.It was in the town of Greccio near Assisi that he used real animals to create a live Nativity scene. Worshippers could contemplate the birth of the child Jesus in a direct way, making use of their senses, especially sight.

His stigmata
Francis had aacquired land and set up a hermitage on Mount Verna. While praying there during a forty day fast in preparation for Michaelmas, he had a vision on the Feast of the Exaltation of the Cross 1224, where he received the stigmata or the five wounds of Christ. 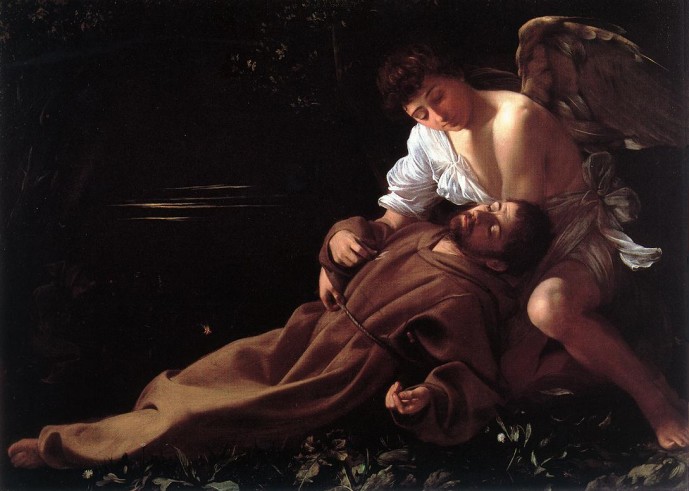 Death
Suffering from the wounds as well as from an eye disease, for which he received treatment but to no avail, he returned to the Portiuncula where he spent the last days of his life and died on the evening of 3 October 1226, singing Psalm 141. One legend says that on his death bed Francis thanked his donkey for carrying and helping him throughout his life, and that his donkey wept. ( The image above right is of St Francis of Assisi in Ecstasy – by  Caravaggio_

Canonisation
In 1228 Francis was pronounced a saint by Pope Gregory IX, who as Cardinal Ugolino di Conti had been his friend and protector of the order.

First Italian poet
Francis is considered the first Italian poet by literary critics. He believed ordinary people should be able to pray in their own language, and so he wrote not in Latin, but in the dialect of Umbria and his are the first poems in the Italian language. His genuine poetic gift as well as his love of the natural world is expressed in his poem Canticle of the Sun (1224) where he addresses Brother Sun, Sister Moon, Mother Earth, Brother Fire, and all God’s creations.

His “Canticle of the Sun” captures his lyrical spirit and sense of oneness with all creatures. An outstanding example of the beatitude “Blessed are the poor in spirit.” At the end of his life he bore in his flesh the marks of Christ’s suffering. Noted for preaching the poor and crucified Christ in both word and deed. 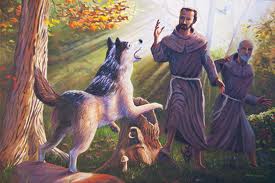 The wolf at Gubbio
At Gubbio, where Francis lived for some time, there was a wild wolf, notorious for devouring men as well as animals. Francis went up into the hills to find the wolf and although fear of the animal had caused all his companions to flee, the saint pressed on. When he found the wolf he made the sign of the cross and commanded the wolf to come to him and hurt no one. Miraculously the wolf closed his jaws and lay down at Francis’s feet. “Brother Wolf, you do much harm in these parts and you have done great evil…” said Francis. “All these people accuse you and curse you… But brother wolf, I would like to make peace between you and the people.” Then Francis led the wolf into the town, and surrounded by startled citizens he made a pact between them and the wolf. Because the wolf had “done evil out of hunger”, the townsfolk were to feed the wolf regularly, and in return, the wolf would no longer prey upon them or their flocks. So Gubbio was freed from the menace.