Summary: Ignatius of Antioch, also called “Theophoros”, meaning “God-bearer”, was an early martyr, who is best known from the seven letters he wrote to various churches in Asia Minor with his strong theology of the humanity of Jesus and his presence in the Eucharist. He also promoted the role of the bishop as a figure of unity in the Church.

Patrick Duffy reminds us here what is known about him. 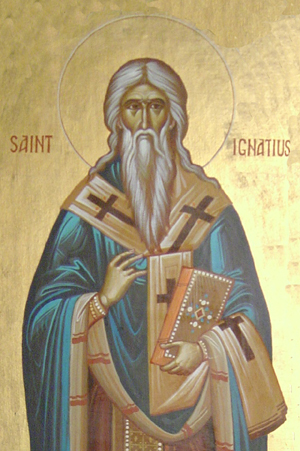 The city of Antioch on the Orontes was founded in 300 BC by Seleucus I, king of Syria, and named for his father Antiochus Soter, a Macedonian general. It was one of the largest in the Roman Empire. It was a key location during the early years of Christianity, and it was there that “the disciples were first called ‘Christians’ (Acts 11:26). Ignatius was the second or third bishop there. During the reign of the Emperor Trajan (98-117), when he was already an old man, he was brought to Rome under military guard.

Letters
On the way Ignatius stopped at Smyrna, where he was able to meet St Polycarp, then a young man. From Smyrna, he wrote four letters: to the churches at Ephesus, Magnesia, Tralles and Rome. At Troas, he wrote his remaining letters to Polycarp and to the churches of Philadelphia and Smyrna.

In the Letters, Ignatius stresses:

Longing for martyrdom
On his way to Rome, Ignatius’s only fear was that the Romans might find a way to stop his martyrdom. He leaves them in no doubt as to what he wanted:

Let me be given to the wild beasts, for through them I can attain unto God. I am God’s wheat, and I am ground by the teeth of wild beasts that I may be found pure bread [of Christ.]  Rather entice the wild beasts, that they may become my sepulchre and may leave no part of my body behind, so that I may not, when I am fallen asleep, be burdensome to any one. Then shall I be truly a disciple of Jesus Christ, when the world shall not so much as see my body. Ask the Lord for me, that through these instruments I may be found a sacrifice to God (Romans 4:1-2). 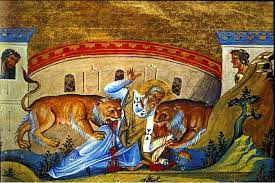 Not long after his arrival in Rome he won his long-coveted crown of martyrdom when he was thrown to the wild animals in the Colosseum. His name is included in the Roman Canon (First Eucharistic Prayer).