Summary of St Callistus I, Pope, Martyr, died in a civil disturbance in Rome about 222 and venerated as a martyr since the fourth century. Born a slave and served a sentence as a convict. Afterwards ordained a deacon and eventually elected bishop of Rome. Rigorist opponents accused him of misunderstanding the doctrine of the incarnation and of laxity in Church discipline. Noted for encouraging the reconciliation of sinners and for his pastoral solicitude for those preparing to marry. 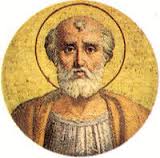 Callistus went from slave, to freedman, to moneylender, to convict, to church administrator, to pope and then, to being denounced by an antipope. His name is especially associated with the catacombs in Rome.

Early life
Callistus seems to have been a slave in the Trastevere area of Rome whose earliest years seemed quite unpromising. Having defrauded his master, who forgave him, he went on to set up his own moneylending business. But when in eager pursuit of a Jewish client, he disturbed the rites of a Jewish Synagogue, he was arrested, convicted and exiled to the salt mines of Sardinia. On his return he worked for some time with the Christian community at Anzio. 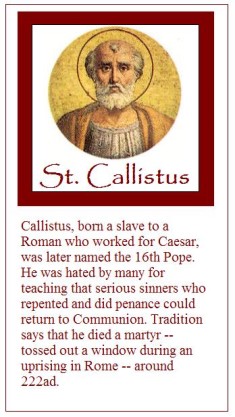 Competent administrator
By this time, however, he seems to have turned into quite a competent person. Pope Zephyrinus (119-217) brought him to Rome, ordained him and made him his administrator and advisor. He put him in charge of the cemetery and places of worship, which some wealthy people had made available to the Christians.

As pope
Callistus was himself elected pope in 217, but a minority followed the more rigorist Hippolytus as anti-pope, thus making Callistus’s papacy from 217 to 222 quite a controversial time. Hippolytus later wrote a biography of Callistus in which he accuses him of being too lenient – allowing priests and even bishops to marry, of being too easy with adulterers and prostitutes after they had done public penance.

Death
Although Callistus is listed as a martyr, there was no persecution at that time, and it would appear that his death took place during a public riot against the Emperor Heliogabalus. 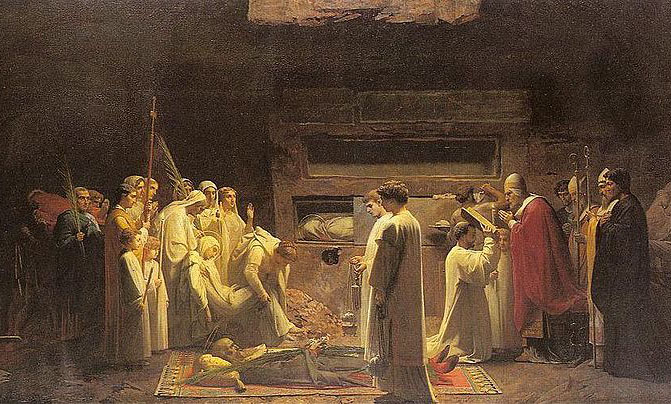 A solemn burial of an early Christian in Callistus’ time

‘His’ Catacombs
The Catacombs of St Callistus is an extraordinarily complex network of underground chambers, the burial place that stretches for miles and is accessible at Via Appia Antica 110-126, Roma. They were re-discovered in the nineteenth century by Giovanni Battista Rossi (1822-94), the father of Christian archaeology. They contain some of the most beautiful Christian art of the early Church. Callistus, however, is not buried there, but on the Via Aurelia.