Summary of  St. Wilfrid was the strong man of the Anglo-Saxon Church. Educated by the Celtic monks at Lindisfarne, he went to Rome and strongly upheld the Roman way of computing Easter against the Celtic monks at the Synod of Whitby (664). Wilfrid also preached at Selsey in Sussex and in Holland. 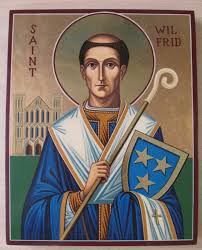 St Wilfred was born in Northumbria in 634 and was first educated at the Celtic monastery of Lindisfarne He then went to Lyon, France, where he was a disciple of Bishop Annemund and to Rome. He came back a strong supporter of Roman church traditions against Celtic ways.

An advocate of Roman practice
During his tenure of the see, Wilfrid energetic in preaching and unafraid of disputes, acted with great vigour, founding Benedictine monasteries in preference to those of Celtic practice.  At the Synod of Whitby (664) he was responsible for the success of the Roman party against the Celtic party in the dispute about the computation of the time of Easter. He kept a large household and acted with magnificence in the style of the Frankish bishops, although his own life was always simple and restrained.

Disputes with Theodore of Canterbury about the division of Northumbria

Wilfrid disagreed with the Theodore’s subdivision of the original see of Northumbria, appealed to Rome and went there himself to plead his case. On his way he spent some time (678-9) preaching the gospel in Frisia and encouraged the Anglo-Saxon Christian mission on the continent, developed later by Willibrord (658-739) and Boniface (672-754). The case was decided in Wilfrid’s favour and the intruding bishops were removed. But when Wilfrid came back, King Egfrith, who had a dispute with Wilfrid for another reason, imprisoned him and released him only on condition he left the kingdom. 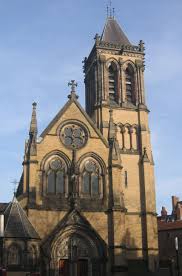 Preaching in Sussex and back to York
Wilfrid headed south to Sussex and preached the gospel at Selsey and in the Isle of Wight. After about six years, when he was reconciled with Archbishop Theodore, Wilfrid became bishop of Hexham (686). When the see of York became vacant, he returned there. But again there was trouble and he had to retire to the midlands. But again Wilfrid appealed and went off to Rome, where again he won his case. However, a synod under a new archbishop of Canterbury, Bertwald, allotted to him the diocese of Hexham, and Wilfrid decided to accept this once the principle of Rome’s authority had been accepted.

Death
Wilfrid died at the age of seventy-six at Oundle in present-day Northampshire. He occupies a central part of Bede’s Ecclesiastical History of the English People. He always appears as a somewhat contentious figure: his disputes have somewhat overshadowed his great missionary activity.