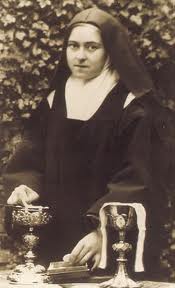 Summary: St Thérèse’s pathway-the ‘little way’ of St. Thérèse of Lisieux, remarkable both for its simplicity and for its depth.

Although she lived for only twenty-four years, St. Thérèse of Lisieux (1873-97), ‘The Little Flower’, has had a huge influence on the history of spirituality. Long associated with miracles of healing and prophecy, she was canonized in 1925, and is the Church’s patroness of the missions. [On Mission Sunday, October 19, 1997, Pope John Paul II proclaimed Thérèse a Doctor of the Church.]

Extraordinary insights
Thérèse was professed as a member of the Carmelite monastery of Lisieux in the Normandy district of France in 1890, but even before her entry to religious life she had shown extraordinary spiritual insights for a girl of such tender years. At the age of thirteen she described a spiritual experience during Christmas 1886 as ‘that night of illumination when our Lord newly born, changed my darkness into a flood of light.’ At Les Buissonnets, her childhood home, Our Lady is said to have smiled on her. Thérèse’s remark to her sister about the incident offers an invaluable insight into her spirituality: “She is more mother than Queen.”

Speaking at Lisieux in 1980, Pope John Paul II said: “Saints never grow old, they never become figures of the past, men and women of yesterday. On the contrary, they are always men and women of the future, witnesses of the world to come.

Thérèse continues to have a contemporary resonance because of the publication of her internationally acclaimed autobiography, The Story of a Soul. Perhaps, the reason for its universal appeal is that it is the story of a young girl and woman with virtually no experience of life beyond Lisieux. The simplicity of her spirituality, ‘the Little Way,’ draws people like a magnet to her. Her whole life was animated by a passionate desire to do the will of God. Like most ordinary people she did not have extraordinary opportunities to prove her love but relied on the ordinary ‘bits and pieces’ of everyday to transform her life from one of mediocrity to sainthood.

A passionate God
At its best, the book provides a wonderful depiction of God. Thérèse hints at a God who dances and astonishes. The love of God transported her, shattered her and consumed her like a fire. This was a passionate heart-battering God, the God who swept her up to the heights in a blaze of flame, whose face was full of the beauty of all creatures, of incredible power and glory. Such was the beauty of God that she could only partially taste Him like a dolphin dipping and plunging into the sea.

Her attitude to prayer is instructive. She believed we should “close the learned tomes” and turn to our own way of prayer that comes from the heart and is uniquely our own. Prayer is not something we do for God but something God does for us.

Thérèse, though, was no starry eyed romantic. When her own sister Marie suggested shortly before her death that a battalion of beautiful angels would sweep her up to heaven at the hour of her death, she scoffed at her. “Such things mean nothing to me,” she said. “I can find nourishment only in the truth.”

Long drawn out death
Thérèse’s death was a long drawn out affair. Appropriately enough, her sorrowful mysteries began on Good Friday, 1896, when she showed ominous early symptoms of the consumption that would claim her life. The preliminary diagnosis was that her death would be a speedy affair, but her illness lingered for eighteen months. Initially, Thérèse simply shrugged off her condition but as illness ate away at her body, she had no option but to confront the inevitable: “It is not death that will come to take me away, but God. Death is not some phantom, some horrible spectre as it is so often presented in pictures. It is the separation of the soul from the body, that is all.”

Six months before her death, Thérèse’s sister, Pauline, called to her sick bed everyday and began to make notes of their conversations. She seemed to have an intuitive awareness of Thérèse’s future impact. Pauline collated the seven hundred random notes scribbled on scraps of paper which were to subsequently form the basis of Thérèse’s book, Last Conversations. These autobiographical passages reveal the depths of her suffering and pain. She suffered all the symptoms of tuberculosis, including high fever, severe thirst, laboured breathing and continuous fits of coughing: “I cough and cough and cough like an old train coming into the station!” She also had the common side-effects of the condition, including gangrene of the stomach and swollen feet. 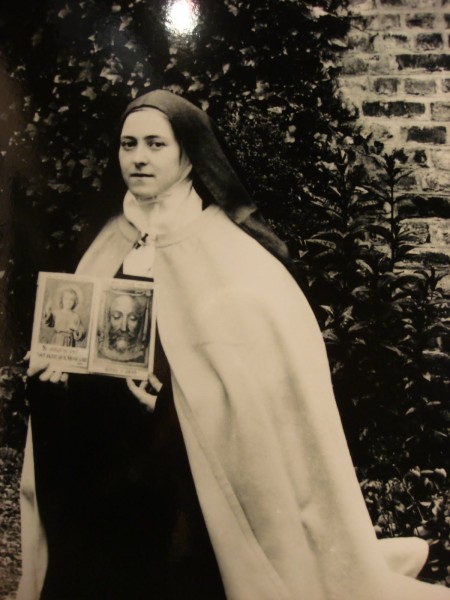 Crisis of faith
However, her suffering was not only physical. The final year of her life was marked by a deep crisis of faith when God seemed totally absent from her life and heaven seemed an impossible dream. Her dark night of the soul is savagely exposed in her writings: “A thick fog, a darkened tunnel, a wall stretching to heaven and shutting out the stars.” Darkness and shadows invaded the caverns of her mind, into the primitive regions of the unconscious and beyond. A sinister presence beyond all perception assailed her senses.

Although she was afraid of death she accepted it in the same way as she accepted life – not in a passive way but believing that darkness can be transformed into light by trust and love. She confided to one of her colleagues: “If you only knew the darkness into which I’ve been flung! Everything has vanished for me. All I have is love. Yes, indeed, what a great mercy it is to have faith! If I didn’t have faith, I should have killed myself without a moment’s hesitation.”

Throughout, she points to the essential foundation of the Christian faith: God has called us in Jesus Christ to help to build his kingdom. Hence, all of Christian existence has to do with understanding this call and with organising our response to this call. “I could never be afraid of a God who made himself so small for love of me.”

Thérèse was not afraid of living the truth, regardless of the consequences. A few hours before she died she said: ‘I have never sought anything but the truth.’ Living the truth was not easy for her. Her life and death were shrouded in contradictions. Sadness and joy, humiliation and glory, agony and ecstasy, failure and triumph went hand in hand. Experiences which we normally think of as opposites coincided in Thérèse. ‘Paradise Lost’ is one half of the story – ‘Paradise Regained’ the other. Today, wherever people are suffering and faced with the prospect of death, Thérèse’s words offer not so much a note of hope as a symphony: ‘It is not death that will come to take me away but God. Death is not some phantom, some horrible spectre as is so often suggested … I am not dying, I am entering into life.”

This article first appeared in Reality (May 1997), a publication of the Irish Redemptorists.