Summary: Ss Isaac Jogues, John de Brebeuf, and companions, Martyrs. John de Brébeuf (1593-1649) and Isaac Jogues (1607-1646) are named in this group of eight North American martyrs, French Jesuits of whom two were lay assistants and six were presbyters. Against a background of conflict between French and English and between Huron, Mohawk, and Iroquois, they went as missionaries teaching the message of Christ in the local languages. They suffered torture and death.for the sake of the gospel. 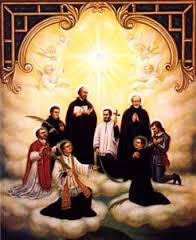 These eight martyrs – six Jesuit priests and two helpers – were all French pioneers of evangelisation in the 17th century among the Huron and the Mohawks in what was then called New France (Canada). They learned the local language and culture, but all met a violent death. They were beatified in 1925 and canonised in 1930.

Jean de Brébeuf (1593-1649)
Jean de Brébeuf was from near Caen in Normandy, France. Trained at Rouen, he was among the first Jesuits to land in Quebec in 1625. He lived among the Huron near Lake Huron, learning their customs and language. He wrote a dictionary of the Huron and is known as Canada’s first real ethnographer. Many of his 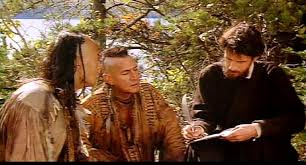 experiences are recorded in the Jesuit Relations, or the annual accounts sent back from the Canadian Jesuit to its Paris office. Although he suffered from tuberculosis, he endured enormous physical hardships, travelling hundreds of miles by canoe, bitten by fleas at night and choked by smoke in log cabins. All these he saw as “minor martyrdoms” compared to the passion of Christ. De Brébeuf was forced to return to France because of a war with England. However, he returned to Canada in 1632. 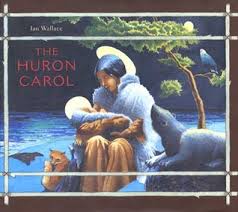 He attempted to convert the Attawandaron on Lake Erie in 1640, but had little success and returned to the mission of St Mary among the Huron in 1644 where the Huron began to accept Christianity. He composed a Christmas Carol in the Huron language, a translated version of which still remains popular in Canada today.

Soon, however, the Iroquois began to win in their war against the Huron. They seized Brébeuf and his fellow Jesuit Gabriel Lallemont and tortured them – by scalping, mock baptism with boiling water – until they died. Their bodies were buried nearby at the Martyrs’ Shrine which Pope John Paul II visited on his visit to Canada in 1984.

Antoine Daniel (1601-48)
Antoine Daniel from Dieppe in Normandy also attended the Jesuit College in Rouen. While there he became acquainted with and taught a young Huron student who had been sent to France for his education. Daniel became interested in the Huron mission and joined Brebeuf when he returned to Canada in 1632 in his second attempt to evangelise the Hurons. Daniel set up a seminary in Quebec to train young Hurons for the priesthood. Then from 1637 he worked for ten years on Lake Huron and had not long settled in Teanaostaye when he and his Huron parishoners were set upon by the Iroquois and cruelly put to death.

Gabriel Lallemont (1610-49)
Born in Paris, both Gabriel’s uncles, Jerome and Charles, were superiors of the Jesuit mission in Canada. Despite taking a vow to go to the Canadian mission two years after ordination in 1632, he spent fourteen years studying and teaching theology in France before arriving in Quebec in 1646. He was only six months working with Fr de Brébeuf when they were both martyred.

Isaac Jogues (1607–46) and Jean de la Lande (d. 1646)
Isaac Jogues was born at Orleans, France and taught literature at Rouen during his scholasticate. He was ordained  a Jesuit priest in 1636. He was sent immediately to Quebec, Canada, as a missionary to the Huron Indians. He was tortured and imprisoned by the Iroquois in 1642 and suffered the loss of two fingers. Later that year on a journey through Mohawk country in New York State during which René Goupil was martyred, he was captured by the Mohawks but the Dutch at Fort Orange (Albany, New York) rescued him and made his way down to New Amsterdam (later New York), the first Catholic priest to visit the settlement. Here he gave the sacraments to the two fellow Catholics he found there. In November 1643 he sailed to France, where his fellow Jesuits already presumed he was dead. He did not visit his mother, wishing to spare her the sight of his two finger removed and the pain of another parting. He received a special permission from Pope Urban VIII to say Mass, even though he lost his index finger.

Back in Quebec in 1644 the French were making peace with Iroquois chieftains at Ossernenon, and Fr Jogues took part in the peace settlement, but after the celebrations an epidemic broke out, caterpillars ate the crops, and famine threatened. The Mohawks blamed Jogues but the majority still wanted to honour his bravery. A minority faction invited him to pay them a visit and when he and a young lay missionary companion Jean de la Lande graciously accepted, they were treacherously tomahawked and their bodies thrown into a ravine.

René Goupil (1608–42)
René was baptized in St-Martin-du-Bois near Angers, France in 1608. He joined the Jesuits, but had to leave the novitiate because of his health. When his health improved, he volunteered to work with the Jesuits in the hospitals of Quebec, where he developed his skill as a surgeon. Assigned as an assistant to Fr Isaac Jogues on his missionary travels, they were captured and tortured by the Mohawks.  While they were in captivity, René expresed his desire to be professed as a Jesuit and Father Isaac received  his vows as a Jesuit brother. He was tomahawked in the head from behind as they saw Goupil making the sign of the cross over a child’s head and interpreted it as an evil sign. He was the first North American martyr. He has come to be regarded as patron of people who work with or receive anasthesia. 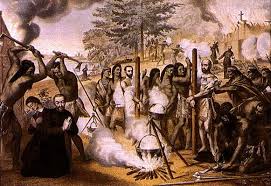 Charles Garnier (1606-49)
Charles was the son of secretary to King Henry III of France. Born in Paris, he was educated at Louis-le-Grand College there. He joined the Jesuits in Paris in 1624. He studied classics, philosophy, and theology at Clermont and taught at the Jesuit college at Eu for three years. Ordained in 1635, he was sent to Quebec and for fourteen years worked as a missionary to the Huron. They called him “Rain-giver” since a great shower of rain after a long drought took place when he arrived. He mastered the difficult language. His patience amidst endless trials won him the title of “lamb” of the mission, just as de Brébeuf was styled the “lion”. After the martyrdom of Fathers Daniel (1648), Brébeuf, and     Lallemant (March 1649), he calmly awaited his own turn and he was martyred on 7 December 1649. 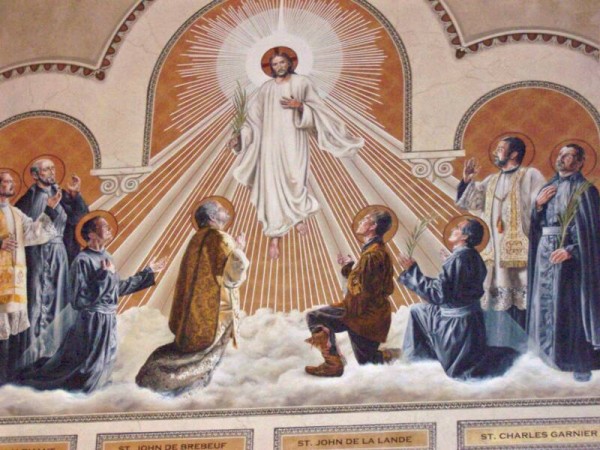 Chabanel entered the Jesuit novitiate at Toulouse at the age of seventeen, and was a professor of rhetoric at several Jesuit colleges in France. In 1643, he was sent to Canada, and after studying the Algonquin language for a time, was appointed to the mission at Sainte-Marie, where he remained till his death. In his apostolic labours he was the companion of Fr. Charles Garnier. As he felt a strong repugnance to the life and habits of the Huron, and feared it might result in his own withdrawal from the work, he bound himself by vow never to leave the mission. He was martyred on December 8, 1649 by what is described as a “renegade” Huron, actually Iroquois then engaged in warfare with the Huron.