Summary: St Paul of the Cross, Priest. Born at Ovada (Italy) in 1694; died in Rome on 18 October 1775. Found a new congregation, the Passionists, who combined a strict penitential discipline with intense devotion to the passion of Christ and whose work was both active and contemplative. Noted for his prophetic preaching in parish missions, for calling sinners to repentance, and for his special gifts of healing.

St Paul of the Cross was the founder of the Passionists, a congregation that has preached the passion of Christ as the centre from which the love of God shines out.

Early life
Paolo Francesco Danei, was born on January 3, 1694, in the town of Ovada, Piedmont, between Turin and Genoa. He was a pious youth. For a while he became a soldier and fought against the Turks, but then devoted himself to a solitary life of prayer.

Vision of Christ’s passion
In 1720 a vision of Christ’s passion inspired him to found a religious order devoted to the passion and Bishop Gastinera of Alessandria in Piedmont vested him in the habit that had been shown to him in a vision, which  Passionists wear even to this day. His spirituality drew its power from meditation on the passion of Jesus as expressing the great love of God. Poverty and self-denial were the qualities that would make his priest shine before the world.

Approval of the Rule
Paolo then went to Rome to get approval for his Rule. His ideal was to combine meditation with the practical work of preaching to the poor and ministering to the sick. The way of life was very hard, and eventually Benedict XIV persuaded him to moderate it and approved the Rule in 1741. He was elected the first superior general in 1747 and his priests were soon in demand throughout Italy.

Spread through Italy
Meanwhile he had built his first monastery near Obitello. Sometime later he established a larger community at the Church of St. John and Paul in Rome. For fifty years he was a tireless missionary of Italy. God lavished upon him the greatest gifts in the supernatural order, but he treated himself with the greatest rigour, and believed that he was a useless servant and a great sinner.

“The service of God does not require good words and good desires, but efficient workmanship, fervour and courage. “If I could preach only one sermon, it would be on the love and mercy of God”” – St. Paul of the Cross 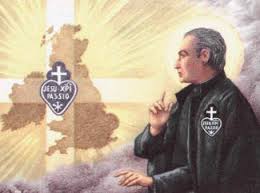 His death occurred at Rome in the year 1775, at the age of eighty-one. The Passionists opened up in Belgium in 1840 and in England the following year. They came to Ireland in Ireland in the 1850s. Fr Dominic Barbieri was the provincial in England who received John Henry Newman into the Catholic Church. Fr Charles of Mount Argus joined up in Belgium, came to England and lived most of his life in Mount Argus, Dublin. He was canonised by Pope Pius IX in 1867. His feast day today is October 20.