Most Catholic schools are inclusive: Archbishop 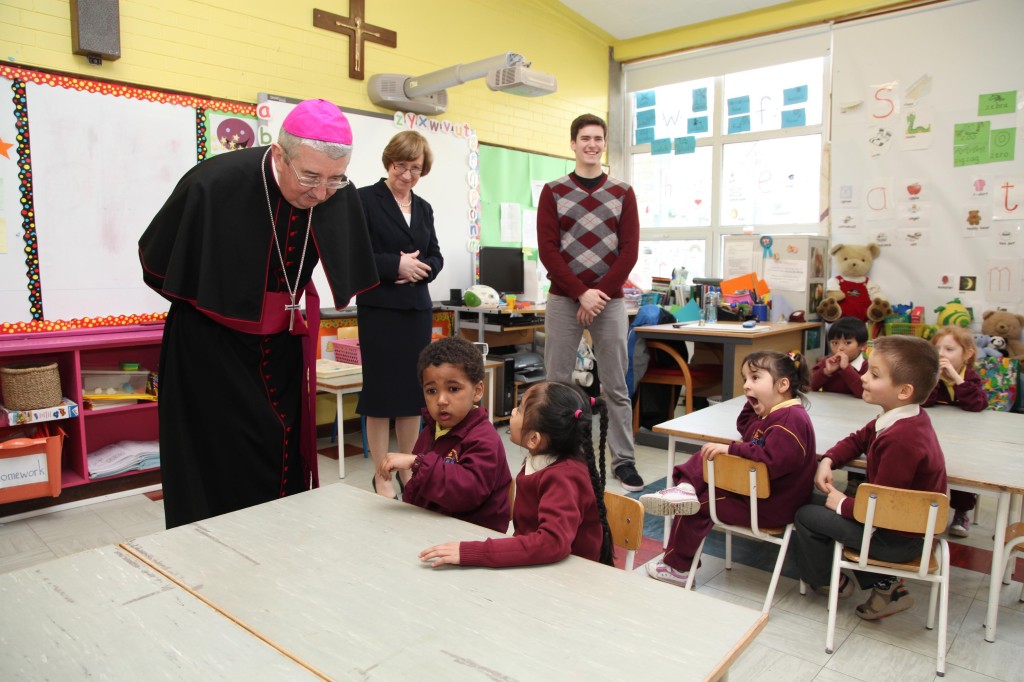 Archbishop Diarmuid Martin of Dublin has said most Catholic schools in Ireland are inclusive and do accommodate children of families of different faiths and outlooks.

On Wednesday evening he hit back at the Minister for Education’s concerns over inclusivity in Catholic schools which were raised at last week’s INTO conference.

In his address on Wednesday evening to the annual conference of the Joint Managerial Body in Galway, the Archbishop said there were challenges to Catholic education not just in Ireland, but elsewhere in Europe.

He also regretted that the increasing number of Educate Together and other schools in the Dublin area was growing “far too slowly” and he said the Archdiocese of Dublin was applying for new schools only where there is clear demand.

He said this value system is recognised by families of a variety of religious traditions who opt to send their children to a Catholic school.

“Religious education remains a valid part of the Irish system of education. We can say so because all the surveys indicate that there is a clear desire of parents to see that their children receive education with some kind of a religious basis.”

Once again, the Archbishop referred to the willingness of the Catholic Church to foster pluralism in educational patronage and the opposition it runs up against, especially at local level.

“That opposition comes often from within local Catholic communities, and it can come – as I have said to the Minister – from local political representatives including some from the Labour Party.”

Elsewhere in his address, Archbishop Martin described himself as “a staunch supporter of denominational education and of Catholic education”.

But he said he also believed that “the future of Catholic education is linked with the necessity of ensuring access to schools of diverse patronage for the children of families who so desire and whose fundamental right it is.”

“There is no divine right to a Catholic near-monopoly in education in Ireland,” the Archbishop warned.

He indicated that the current situation in which the number of Catholic schools greatly exceeds the percentage of Catholics in the population was unsatisfactory.

“There are people in Ireland who wish their children to attend schools without any religious ethos. The State would be failing in its duty if it did not see that such citizens can exercise that right.”

He added, “The natural right of parents to decide on the education of their children is a right recognised in Catholic social teaching, not just for Catholics.”

The Archbishop, who is patron of over 90 percent of primary schools in Dublin, warned that the State would be going outside its remit if it were to impose on Catholic schools a radical re-dimensioning of their religious ethos.

“Where parents wish their children to receive education with a Catholic ethos, the State has the obligation to support that choice.”

He underlined that Catholic schools which provide the same educational service as other schools should receive the same support also with regard to the cost of management services.

Pluralism is something we should welcome, he told delegates, who included the Minister for Education, Ruairi Quinn, and he assured the conference that Catholic education will continue to play that role in the future, working alongside other schools which embrace a different ethos and contribute, in their way, to the rightful pluralism of educational provision in today’s Ireland.

In a reference to the Minister’s remarks at last week’s conference, the Archbishop said one could discuss precisely at what moment in the school day specific religious instruction might take place in the Catholic school.

“Catholic ethos is not about a Mission Statement posted above the school entrance, and which you pass by almost without even noticing it,” the Primate of Ireland said.

Looking to the future, Dr Martin said the Catholic children of the Ireland will live in a climate of pluralism and must learn not to fear pluralism but to be able proudly and confidently to live their faith in a pluralist culture, a faith which hopefully will be nourished to maturity in the Catholic school.

Young Christians need strong roots in their faith in order to flourish in a pluralist society, he commented.

The response to the challenge of pluralism will have to be measured, however, not just in terms of pluralism in patronage, but in an outcome in which every school, independent of its patronage, becomes a place of welcome for the deprived, the marginalised and those with educational challenges.

He warned that there is a tendency in some circles to use the name pluralism to opt out of pluralism and keep away from schools with a high proportion of disadvantaged children.

“Pluralism should not produce negative rivalry or antagonism or give rise to elitism or social division, or a culture which seeks to maintain unviable schools just because they are Catholic or ‘local to us’.”

“We need to build up positive relationships within the entire educational community in such a way that our children learn to respect each other and to understand what it means to live one’s values with conviction within a respectful pluralist framework, in a modernity of mutual and respectful understanding,” he said.

He said a clear plurality would make it easier for teachers to find an environment in which they can be true to their convictions.

“The Catholic school must produce good citizens, young men and women who can flourish in their personal talent but also have a real commitment to place their talents at the service of the common good,” the Archbishop suggested.