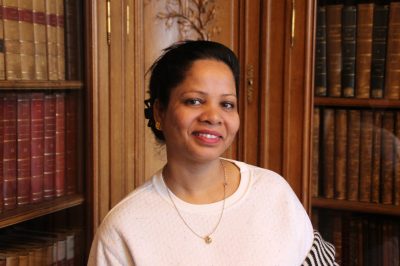 Asia Bibi © Aid to the Church in Need

In an interview with Aid to the Church in Need (ACN), Asia Bibi, the Christian woman formerly on death row for blasphemy, gave a powerful testimony about how her faith helped her through these darkest times.

She said: “During my detention, I held the hand of Christ. It is thanks to him that I have stayed standing. Do not be afraid.”

Discussing her time in prison, Asia did not present any anger or bitterness about her nine years of trial and confinement. Asia is a mother from Pakistan’s Punjab province, and was accused of blaspheming against the Islamic Prophet Mohammad in June 2009.

According to ACN, Ms Bibi said she wants to use her media profile to speak up for other victims of injustice in her home country, including those falsely accused of blasphemy. “It is thanks to the media that I am still alive,” she said.

Since her departure from Pakistan, Ms Bibi has spent nine months in Canada. However, she longs to return home: “[Pakistan] is my homeland. I love Pakistan passionately.” She recounted her childhood in Pakistan where Christians mixed happily with Muslims.

A baptised Christian since she was eight years old, Ms Bibi said: “I played with Muslim neighbours. There was no separation.” However, she explained how interfaith relations turned sour, with increasing numbers of Islamist attacks on Christians.

There have been a disproportionate number of blasphemy allegations in Pakistan against Christians, Ahmadi Muslims, Hindus and other religious minorities, with many accusations apparently resulting from personal vendettas. There are frequent cases involving the abduction, forced conversion and forced marriages of Christian girls.

We pray for our brothers and sisters in Pakistan and Asia Bibi’s safe return.