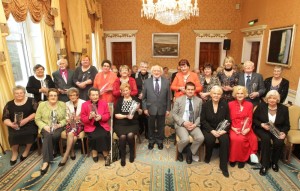 Mary McDonnell (78) from Cork has cared for her daughter Sinead, who has cerebral palsy, since her birth 52 years ago.

Kathleen Maguire (60) from Westmeath has been a carer for over 40 years, firstly looking after her mother who had Alzheimer’s, and then a blind sister.

Mary, Peter and Kathleen were among twenty family carers honoured earlier this week by President of Ireland, Michael D. Higgins, for providing a collective 793 years of care for their loved ones.

At a special ceremony hosted by the Carers Association in the Shelbourne Hotel, President Higgins presented each family carer with a commemorative piece of Penrose crystal in recognition of their love, dedication and many sacrifices made in providing long-term care of between 30 to 54 years each.

According to most recent statistics from the Health Research Board, the number of ageing parent carers is on the rise.

“As a society we must all be grateful for the quiet, sustained work of the many unsung heroes who provide critical care for family members and others who, without that care, would be unable to remain in their own homes,” said President Higgins at the award ceremony.

He added, “That such care is altruistic and given with generosity does not, and should never, exonerate the State from its duty of care towards all of its citizens.”

The President said that each person chosen for the award, and the people they represented,  provided “an essential service which allows someone affected by illness or disability or old age to live as comfortable and normal a life as possible within the familiarity of their own home and to be surrounded by their own unique memories as they struggle with the effects of their debilitating illness or disability.”

The family carers honoured at Wednesday’s ceremony came from across Ireland.

They included Mary McDonnell (78) from Douglas, Co Cork who has cared for her daughter Sinead since her birth 52 years ago.

Sinead has Cerebral Palsy and a very severe degree of spastic quadriplegia. While Sinead’s mind is fully functional, she is a wheelchair user, has scoliosis of the spine, a dislocated hip and needs full-time care.

Another recipient was Peter Riordan (84), Ireland’s Carer of the Year 2012, from Naas, Co Kildare.

Mr Riordan has a family of nine and has provided full-time care for three of his family for nearly 40 years.

He cared for his wife Ethel until her passing in 2004 and currently cares for two sons – Ronan (39) who has Downs’ Syndrome and Bernard (54) who was left brain-damaged and wheelchair bound following a tragic car crash in 1978 involving another son, Stephen, who died in the accident.

Brigid Redmond (75) from Walkinstown, Co Dublin also got the award.

She  has been caring for her son, Dermot, for the past 45 years. He has a learning disability but in recent years has been in turn caring for his mother as she has cancer.

A woman from Co Westmeath, Kathleen Maguire (60), has been a carer for over 40 years, looking after her mother who suffered with Alzheimer’s for a number of years before she passed away, as well as a blind sister Rosaleen (52).

“With Kathleen’s help and encouragement, Rosaleen is set to realise her singing dreams this year with the launch of her first album,” commented Catherine Cox from the Carers Association.

“In our society we acknowledge and reward achievement, whether in business, sport, the arts or other endeavours,” said President Higgins.

“We are here today to celebrate achievements, which are born of a spirit of giving to others. Unlike others, family carers work is done quietly and in the background, and they neither seek nor receive any fanfare.”