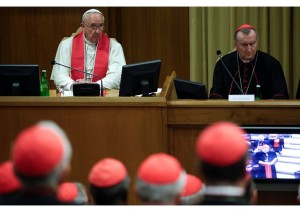 Pope Francis and the Vatican Secretary of State Cardinal Pietro Parolin told a consistory of cardinals on Monday that the defence of Christians in the Middle East is a key question of human rights.

The Pope convened the consistory in the Vatican for a meeting whihc was originally scheduled in order to proceed with the causes of saints and the canonisation of Goa native and evangeliser of Sri Lanka, Blessed Joseph Vaz, on 14 January 2015 during the Pope’s visit to Sri Lanka.

However, the Pontiff expanded the agenda of the meeting to include a discussion of the ongoing crisis in the Middle East.

In remarks to the gathered cardinals at the opening of the session, Pope Francis decried the “spirit of indifference” that seems to dominate, making the sacrifice of the human person to other interests a matter of course.

“This unfair situation,” he said, “requires an adequate response by the international community, as well as and in addition to our constant prayer.”

He concluded by saying, “I am sure that, with the help of the Lord, genuinely worthwhile reflection and suggestions will emerge, in order to help our brothers and sisters who are suffering, and also to face the drama of the reduction of the Christian presence in the land where He was born and from which Christianity spread.”

Among the participants were the Patriarchs of the Oriental Catholic Churches present in the Middle East.

In an afternoon address to the consistory, Cardinal Parolin called on the international community to take action “to prevent possible new genocides” in the Middle East.

“Fundamental principles, such as the value of life, human dignity, religious liberty, and peaceful coexistence among peoples and individuals are at stake” in the current struggles in the Middle East, Cardinal Parolin said.

He called for action to resolve the longstanding dispute between Israelis and Palestinians, and to stop the current bloodshed in Syria and Iraq.

On the threat posed by the Islamic State, Cardinal Parolin underlined that “it is licit to stop the unjust aggressor” but “always in a manner consistent with international law.”

The Vatican Secretary of State said it should be clear that military action alone will not provide a real solution to the problem and he highlighted the illegal commerce in oil and the supply of weapons and technology.

Cardinal Parolin repeated Pope Francis’s denunciation of the arms trade saying, “In a moment of particular gravity, given the growing number of victims caused by the conflicts raging in the Middle East, the international community cannot close its eyes before this question, which has profound ethical relevance.”

The role of the Church – of Christians and of Christianity – in the complex social and cultural milieu of the Middle East, and especially in majority-Muslim nations, must be a major focal point he suggested.

Discussing the context in which Christians in the Middle East live their lives, he said “[There is a] lack of separation between religion and State, between the religious sphere and the civil sphere – a tie that makes life difficult for non-Muslim minorities and in particular for the Christian minority. It would be important, therefore, to contribute to efforts to nurture the notion of the distinction of these two spheres in the Muslim world.”

Cardinal Parolin went on to call on the international community not to remain inert or indifferent before the present situation.

“In the specific case of violations and abuses committed by the so-called Islamic State, the international community, through the United Nations and the structures that exist for [addressing] similar emergencies, must act to prevent possible new genocides and to assist the numerous refugees.”

Cardinal Parolin continued to explain, “The defence of Christians and of all the other religious or ethnic minorities is to be situated in the context of the defence of the person and of the respect for human rights, in particular for those of religious liberty and the freedom of conscience.”

“In any case, the need to promote and develop the concept of citizenship, as a reference point for social life, guaranteeing the rights of minorities through adequate juridical instruments, has become evident.”

The Cardinal said Christians throughout the world have a duty “to sustain our brothers and sisters in Christ with prayer and with every possible means.”