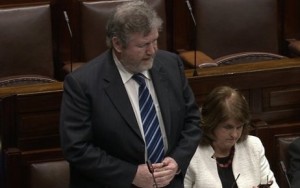 The Pro Life Campaign has criticised Minister for Children, James Reilly, over his call for a repeal of the 8th Amendment in an interview with the Sunday Independent.

The Fine Gael deputy leader called for an abortion referendum early in the next term of government to repeal the 8th Amendment, which gives equal right to the life of the mother and the unborn child.

In the interview with the Sunday Independent, Minister Reilly said he could not “countenance, as a doctor or human being” women being forced to go through with their pregnancies in cases of fatal foetal abnormalities.

Elsewhere he said, “most repugnant of all to me is that they have to leave this country for a termination and then sneak back in like criminals to bring their babies’ remains back. That’s patently wrong”.

In relation to rape, Dr Reilly commented that it is “very difficult to ask a woman who has been raped and violated to continue to carry a child”.

Meanwhile, a Sunday Independent/Millward Brown opinion poll has shown a drop in support for a referendum on repealing the 8th Amendment.

Commenting on Minister Reilly’s call, the Pro Life Campaign’s Deputy Chairperson, Cora Sherlock said in a statement, “It is an appalling tragedy that families of babies with life-limiting conditions are returning home after aborting their child to discover, when it is too late, about the existence of perinatal palliative care as an alternative to abortion.”

She explained that through perinatal palliative care parents and families of babies with a terminal illness receive the supports and help to care for their son or daughter for whatever short length of time they survive.

She warned that with the focus almost exclusively on repeal of the 8th Amendment this life-affirming and positive side of the story is not getting the attention it deserves.

“Minister Reilly never turns down an opportunity to talk about widening the grounds for abortion but he has no track record on delivering proper perinatal palliative care provision in Ireland. He would be better served devoting some time to this as well as listening to parents who were pressured to go down the road of abortion in similar situations and now deeply regret the decision,” Cora Sherlock said.

She described the drop in support for abortion reflected in the Sunday Independent/Millward Brown poll as “encouraging.”