Home > Featured > Four seminarians abducted in Nigeria have been identified 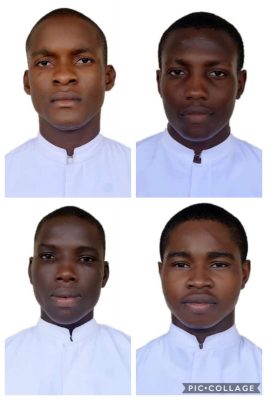 Four seminarians who were kidnapped in Nigeria on Wednesday 8 January from Good Shepherd Major Seminary in the city of Kaduna, northern Nigeria, have finally been identified. The Catholic charity that supports persecuted Christians, Aid to the Church in Need (ACN), has been able to identify the men as Pius Kanwai (19), Peter Umenukor (23), Stephen Amos (23) and Michael Nnadi (18).

At evening armed men crashed through the fence surrounding the seminarians’ accommodation, forced themselves into the building, stole some valuable items and abducted the seminarians. The four abductees, from different diocese in northern Nigeria, were only at the beginning of their studies for the priesthood.

Police say their prompt reaction stopped the assailants from abducting any additional students. However, the identity and motive of the kidnappers remain unknown.

With abductions having risen acutely in Kaduna, the Rev John Joseph Hayab, President of the Christian Association of Nigeria, said abductions in the state had become “a big business” though some kidnappings are for religious reasons.

Bishop Matthew Hassan Kukah of Sokoto fiercely criticised the Nigerian government for failing to prevent this kind of violence. He told ACN, “The only difference between the government and Boko Haram is Boko Haram is holding a bomb.”