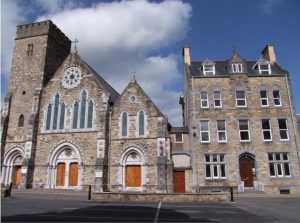 A historic church in Clonmel in County Tipperary where a wall was extensively damaged last summer has provided a unique insight into the town’s history.

Last summer, plaster fell off the wall of Clonmel Friary. Subsequent tests revealed that the structure underneath was the original wall of the tower, which was constructed between 1350 and 1400.

Following professional advice, it has since been decided that this section will not be re-plastered, and the original wall will be left visible in the Friary, which is believed to be the oldest building in Clonmel.

Speaking this week to the Nationalist newspaper in Clonmel, Friary Guardian, Fr Larry Mulligan O.F.M.,  said: “We were fortunate that nobody was near that area in the church when the plaster fell. Residual moisture in the brickwork loosened the bonding between the brick and the plaster. Following tests it was decided that all of the plaster would have to be removed. Some pointing of the wall may need to be carried out, although this won’t interfere with the structure, which will be left in its original form.”

Fr Mulligan revealed that a fundraising drive is now taking place in Clonmel to fund works necessary to preserve the tower in its original form.

He added that “The Franciscans have had a presence in Clonmel for the last eight centuries and this unique feature of the town’s history will be preserved for the benefit of present and future generations of Clonmelians. It will be an addition to the architectural heritage of the town.”

The original friary church in Abbey Street in Clonmel was built in 1269. This building had a turbulent history. The Franciscan community was dispersed, moving to other locations in the town after the monastery was seized during the Suppression on 8 March 1540. The move followed King Henry VIII’s plan announced in 1536 for the dissolution of the Irish monasteries to raise money for the state. The Franciscans returned to Abbey Street in the 1800s.