Clonmel celebrates ‘Memorial of Mary – Mother of the Church’ feastday 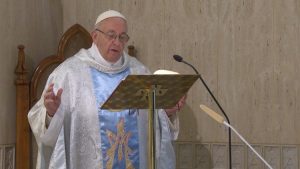 Pope Francis celebrates Mass at the Casa Santa Marta on the Memorial of the Blessed Virgin Mary, Mother of the Church

Primary school children and residents from a local nursing home in Clonmel gathered on Monday to mark the institution of the feast of the Memorial of Mary – Mother of the Church.

“The theme was: ‘All generations will call me blessed’, so it was the combination of young and the old together,” Fr Micheal Toomey told Catholicireland.net.

“The children sang the ‘Magnificat’ and ‘Hail Queen of Heaven’.”

He said that this was “something different” for the primary school pupils who would not have experienced these hymns and May altars before, which were to be seen in every house and shop window in Clonmel in the past.

“The young people met the older people after Mass and it was lovely to see them talking about the good old days,” said Fr Toomey.

“There used to be the Corpus Christi procession years ago and in Clonmel the procession of Our Lady in May and the May altars and the children were just fascinated. They hadn’t really heard stories of that before.” 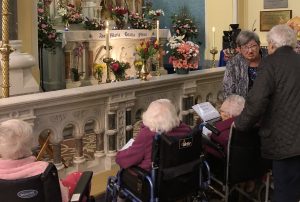 They led the singing at Mass, proclaimed the Word of God, led the Prayers of the Faithful and offertory.

Residents from the local nursing home in Melview also attended with the help of the Clonmel and District Wheelchair Association, along with many local parishioners.

According to Fr Toomey, some of the residents shed a tear as they remembered the good old days.

The Clonmel celebration was just one of many across Ireland and the world.

The special feast was instituted early this year by Pope Francis, following a decree issued 3 March 2018, by the Congregation for Divine Worship and the Discipline of the Sacraments, signed by its Prefect, Cardinal Robert Sarah. (see Cinews 5 March 2018)

“The joyous veneration given to the Mother of God by the contemporary Church, in light of reflection on the mystery of Christ and on his nature, cannot ignore the figure of a woman (cf. Gal 4:4), the Virgin Mary, who is both the Mother of Christ and Mother of the Church,” stated the decree. The feast is now on the Roman Calendar for the Monday after Pentecost.

On the Memorial of the Blessed Virgin Mary, Mother of the Church, in his homily during Mass at the Casa Santa Marta, Pope Francis said, “The Church is feminine” and “She is a mother.”

When this trait is lacking, the Pope continued, the Church resembles merely “a charitable organisation, or a football team”; when it is “a masculine Church,” it sadly becomes “a church of old bachelors incapable of love, incapable of fruitfulness.”

The virtue that primarily distinguishes a woman, Pope Francis said, is tenderness, like the tenderness of Mary, when she “gave birth to her first-born son and wrapped Him in swaddling clothes, and laid Him in a manger.”

The Pope said that the Church as a mother goes along the path of tenderness.

“It knows the language of such wisdom of caresses, of silence, of the gaze that knows compassion, that knows silent. It is, too, a soul, a person who lives out this way of being a member of the Church, knowing that he or she is [like] a mother [and] must go along the same path: a person [who is] gentle, tender, smiling, full of love,” he said.

Tags: 'Hail Queen of Heaven'.”, Casa Santa Marta, Clonmel, Congregation for Divine Worship and the Discipline of the Sacraments, Magnificat, Pope Francis, Sisters of Charity and SS Peter & Paul’s NS, The Memorial of Mary - Mother of the Church