The 850th anniversary of the death of England’s most famous martyr, St Thomas Becket, will be marked by a special exhibition organised by the British Museum. 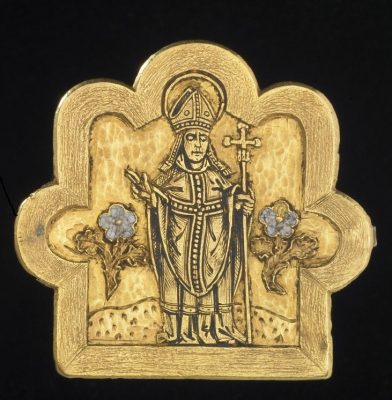 The museum is promising visitors an opportunity to “get up close to the man, the murder and the legend” via an incredible array of objects associated with the man who was murdered in Canterbury Cathedral on 29 December 1170.

Details of the exhibition were announced yesterday, on the anniversary of the martyrdom. Treasures to be displayed include medieval stained glass, manuscripts, jewellery and sacred reliquaries.

The son of Norman merchants, Becket was a commoner who was to become a close friend of King Henry II, in whose administration he served as Chancellor of the Exchequer and with whom he enjoyed a lavish lifestyle.

When the position of Archbishop of Canterbury became vacant, King Henry II worked to have Thomas appointed to the post, hoping that this would increase his power over the church. As an archbishop, however, Becket became increasingly religious in his outlook and gradually turned his back on worldly goods and comforts.

Against Henry’s wishes, Becket resigned the post of Chancellor and then defied the king by refusing to sign the Constitutions of Clarendon, an attempt by Henry to grant the Civil Courts jurisdiction over some ecclesiastical matters, such as criminal activity by clergymen. Becket held that the Constitutions would mean that clerics were punished twice for the same crime.

In 1164, Becket was found guilty of treason and fled to France, but the Pope threatened Henry with excommunication if Becket were not allowed to return to Canterbury and England. The two men, king and archbishop, met privately and it looked as though their personal dispute was coming to an end. Becket, however, subsequently excommunicated three bishops that had taken part in the coronation ceremony of Henry’s eldest son, known as Henry the Young King.

According to folklore, when Henry heard of the excommunication, he commented: “Will no one rid me of this turbulent priest?” Four of his knights took this as a command to execute Becket and they travelled to Canterbury where they entered the cathedral shouting: “Where is Thomas Becket, traitor to the King and country?” Thomas is said to have replied ‘I am not traitor and I am ready to die’ before being put to the sword.

The murder had an immediate impact on Henry’s standing, with the king forced to abandon attempts to gain control over the church and church properties. The four knights were excommunicated and, to earn forgiveness, they had to go on Crusade for fourteen years. To show his repentance, in 1174 Henry walked barefoot to Canterbury where he was whipped before Becket’s tomb.

An astonishing cult to St Tomas Becket spread across Europe. Canterbury became the biggest place of pilgrimage in England. In Scotland, King William the Lion had Arbroath Abbey dedicated to Becket in 1197. The oldest surviving image of the Englishman is believed to be an icon in Monreale Cathedral in Sicily.

“In death Becket remained a figure of opposition to unbridled power and became seen as the quintessential defender of the rights of the Church,” says Lloyd de Beer, the Ferguson Curator of Medieval Europe at the British Museum.

In Canterbury, however, the shrine of St Thomas Becket was destroyed by another English king, Henry VIII, in 1538. He believed the cult was an obstacle to his attempts to destroy the power of the Church in England.

The Thomas Becket Exhibition at the British Museum will open in October 2020.