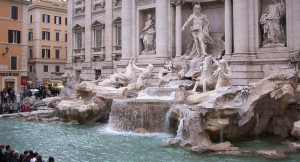 One of Rome’s most famed tourist attractions will stage a significant gesture of solidarity with Christians persecuted in the Middle East next week.

The water of the famous Trevi Fountain will be dyed red on Friday 29 April in order to draw attention to “the tragedy of anti-Christian persecution”.

The event is being overseen by the international Christian charity, Aid to the Church in Need, in an effort to draw a “long-lasting concrete reaction” from the public.

The charity has also organised for Chaldean Catholic Bishop Antoine Audo of the Syrian city of Aleppo to speak at the event.

Cardinal Mauro Piacenza, the International President of Aid the Church in Need, will also speak that day.

ACN has said that “the systematic violation of the right to religious freedom, especially that of Christians, must become the central issue of the public debate.”

Directly under the Holy See, Aid to the Church in Need supports the faithful wherever they are persecuted, oppressed or in pastoral need.

The Catholic charity undertakes thousands of projects every year including providing transport for clergy and lay Church workers, construction of church buildings, funding for priests and nuns and help to train seminarians.

Recently, a spokesman for Aid to the Church in Need appealed to the Irish government to recognise the genocide that is unfolding against Christians in the Middle East before it is too late.

John Pontifex made the call ahead of his address in Dublin two weeks ago entitled ‘Genocide: How Christians are being killed and driven out of the Middle East for their faith’.

Speaking to CatholicIreland.net, Mr Pontifex said “It is absolutely vital that we stand up for those who are persecuted and those who are faced with genocide. It is quite timely that there should be the link between events in 1916 which we are remembering and events today in 2016 in Syria and Iraq.”

Speaking about his recent fact-finding visit to Syria, where he visited the destroyed city of Homs, Maaloula and Damascus, John Pontifex said the criteria for genocide under the UN Convention on Genocide had been met in Syria and Iraq against Christians and other faith groups.

He said the UN Convention on Genocide defines genocide in terms of a very definite attempt to eliminate a particular religious or ethnic group from their homeland.

“If you look at the work of ISIS in Iraq and Syria and also in places like Libya too, you can see that the objective is very clear – to eliminate by whatever means or recourse is required, particular faith groups. It is not just Christians – if you look at the situation on the ground in Iraq and Syria – it is the Yzisidis and also specific Muslim groups who do not share the ISIS vision of Islam who also have had it in the neck.”

“They have been forced out of their homes, some of them have been killed, their churches and other places of worship have been desecrated and in some cases repeatedly, people have been in some instances given a choice to either convert or leave.”

Aid to the Church in Need is providing assistance to people affected by the conflict in Syria.

“Our position as a charity is that we want to save Christianity in the Middle East by saving one family at a time. To save the community we have to help them by physical practical means.”