Threat of famine looms in Somalia 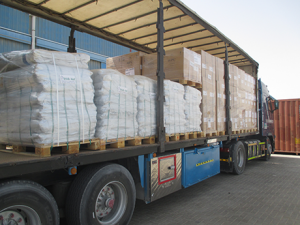 Ireland provided over €6.7m to the Somalia crisis in 2017, including 75 tonnes of Irish Aid humanitarian supplies – tents, water tanks and mosquito nets transported to Somalia and distributed by Trocaire and the United Nations.

This week, humanitarian relief supplies provided by Ireland are being distributed in Somalia which is suffering severe drought. Minister of Foreign Affairs and Trade, Charlie Flanagan, and Minister of State for the Diaspora and International Development, Joe McHugh, detailed the scale of the problem in Somalia when they announced that Ireland had dispatched over 100 tonnes of humanitarian relief supplies to Somalia.

“I am deeply concerned that over 6 million people in Somalia are now in need of urgent humanitarian assistance. Almost 3 million people are facing crisis and emergency levels of food insecurity and there is a very real and significant risk that the situation will further deteriorate to famine, causing starvation and death. This is simply unacceptable in our world of plenty,” said Minister Flanagan.

He added that the situation in Somalia today is similar to when the country had the worst famine of the 21st century in 2011, when the Somali people faced famine and more than a quarter million lives were lost.

“A massive and urgent scale up of assistance by the international community is required to avoid a similar catastrophe this year. Acting now will save lives,” said Minister Flanagan. 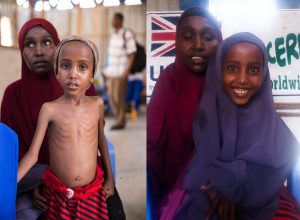 Yasmin’s arrival at Concern and 12 weeks later after treatment

Prolonged drought has caused the displacement of 400,000 people over the last six months. They are arriving in settlements with only what they can carry. Most have walked long distances to reach these camps in hoping for help.

The minister stated that Ireland’s emergency supplies, sent last week and now being distributed, will help to meet the immediate needs of up to 4,000 displaced families. Supplies, including blankets, jerry cans, cooking sets, family hygiene kits, tarpaulins and solar lamps, are being distributed by Concern Worldwide to families displaced to informal settlements located outside of Mogadishu and Baidoa, and in the Afgoyee Corridor, north-west of Mogadishu.

Minister McHugh stated that last month that Ireland had provided new funding of €11 million to humanitarian crises in the Horn of Africa region. €3 million of this went to the UN-managed Somalia Humanitarian Fund, to help partners to provide life-saving assistance to those most in need and at risk of famine in the country.

The Minister said that if the April to June rainy season is as poor as predicted, then hunger and displacement will only get worse. “The situation for children is especially grave with over 360,000 Somali children under the age of five now acutely malnourished,” he said. He added that urgent action is required.