Tenth anniversary of the death of St John Paul II 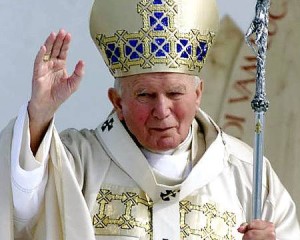 Today marks the tenth anniversary of the death of St Pope John Paul II on 2 April 2005, the first non-Italian pope elected since the 15th century, whose pontificate was the second longest in history.

Recalling the impact of the Polish Pontiff, who served from 1978 until 2005, Pope Francis on Wednesday described his predecessor as “a great witness to Christ in His suffering, death and resurrection”.

He said St John Paul II showed sick people how to “carry the cross of suffering with joy”.

At the conclusion of his regular weekly public audience on 1 April, the Pope also invoked St John Paul II’s intercession for the faithful, the family and the Church “so that the light of resurrection may shine over all the shadows of our life and fill us with joy and peace”.

The anniversary falls as a new poll shows that a third of Poles believe John Paul II’s death made people better.

According to polling firm TNS, 34 percent of respondents said people are better as a result of experiencing the death of Karol Wojtyła.

John Paul II’s tomb is located in St Peter’s Basilica in Rome. A simple stone slab with the inscription “Ioannes Paulus PP. II (1920-2005)” marks his tomb out beneath a painting of St Sebastian.

When he died, hundreds of thousands lined up at the Vatican to pay their respects.

It was at his funeral Mass in St Peter’s Square, that the popular cry “Santo subito, santo subito” began. He was canonised in April 2014, nine years after his death.

Meanwhile, a new documentary on Pope St John Paul II and his relationship with North and South America will screen on Canada’s Salt + Light Television network on Sunday, 12 April (at 9pm Eastern time) which will also be streamed live on the network’s website.

The documentary will follow Canada’s national observance of the 10th anniversary of the pontiff’s death – the inaugural Pope John Paul II Day – on Thursday, 2 April.

It explores his papal travels from Argentina to Alaska – 22 journeys, including three to Canada – generated massive crowds.

John Paul II became the first pope to set foot on Canadian soil when he paid a 12-day pastoral visit in 1984 which also took in World Youth Day.

The documentary will also be shown this month on CatholicTV in Boston, which can be seen on Roku and Google TV.

For more information about the film, including broadcast times and the DVD release, visit www.kofc.org/jpiifilm