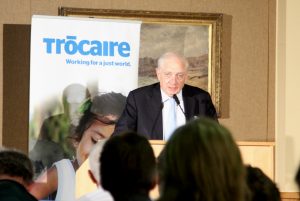 Peter Sutherland delivering the annual Trócaire address on the theme ‘Migration – The Moral Challenge of Our Time’. Pic courtesy of Trócaire.

The debate on migration taking place in Europe today is an attack on the fundamental concepts of the dignity of man and the equality of man, the President of the International Catholic Migration Commission said on Thursday evening in Maynooth.

Delivering the annual Trócaire address on the theme ‘Migration – The Moral Challenge of Our Time’, Peter Sutherland criticised those prime ministers in central and eastern Europe who said they would only take in refugees who are Christian.

“You begin to question whether the values of Christian civilisation, which they claim to represent, have been anything more than skin deep,” he challenged and added, “When you see the rejection of desperate people – so desperate that 1,400 of them have already drowned this year trying to escape across the Mediterranean…”

Mr Sutherland said that such desperate people are not to be granted sanctuary or asylum because they are Muslims made him question what European society’s values really represent.

He also warned that “our inability in Europe to share the responsibility that we all owe to suffering humanity is spreading in a dangerous way.”

Europe’s refusal to help refugees is an indictment of our civilisation he said as he criticised border controls masquerading as migration policy as “a pathetic response to a moral challenge”. 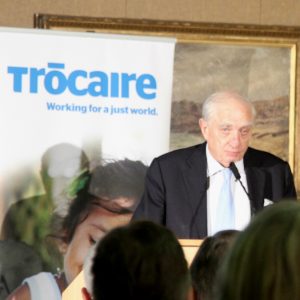 Noting that Europe holds 29% of global wealth he noted that the continent said it was unable to handle one million refugees and this was the basis on which razor wire fences had been built. “What an indictment of our civilisation,” he criticised.

Praising efforts in Germany and Sweden to accommodate their fair share of refugees, he said that this had resulted in a backlash from the extreme right in both countries. “We can’t let the bad guys win,” he appealed.

Peter Sutherland also highlighted that when Pope Francis took 12 refugees back with him on the flight from Lesbos to the Vatican, that number of refugees was more than the number of refugees taken in by 21 countries in the EU took over the last 12 months.

Of Ireland’s role in the refugee crisis, he commented, “I think we could do much more,” as he emphasised that Irish politicians haven’t put in place a system to accommodate an increased number of refugees.

He said the protestant churches in Germany had achieved a system which the Church here could look to when organising their parishes to take refugees.

“Ireland should be part of the debate; we have left a mark throughout the world through our missionaries – leaving an image of society that did care. Trócaire continues that. Politically we should be leading in this debate but you can only lead if you can give example,” he said.

At the start of his address, Mr Sutherland paid tribute to St Patrick’s College Maynooth, which hosted the lecture.

“It is a particular pleasure to be here in this place – in a place which represents the Church that has done so much for our country, for our people and for our world. To be here under the aegis of Trócaire which as part of Caritas is something which represents the values which are the essence of Church itself. It is an honour to be asked to speak,” he said.