Over 300 ‘Street Pastors’ take to the streets on weekend nights in Ireland  to “care, listen and help” people who are our and about, coming from pubs, restaurants and night clubs.

The volunteers come from many churches and see their work as “the Church in action” in Belfast, Ards, North Down and Cork.

On 2 May, two Street Pastors information meetings will be held in Dublin (10am at The Exchange, 50 Gardiner Street and 7.30pm at the Dublin Central Mission, 9c Lower Abbey Street), with a view to beginning the service in Dublin.

In Belfast, Street Pastors gather every Friday and Saturday evenings at 10:45pm to pray and prepare their equipment (flip flops, first aid kits, water, gloves for picking up bottles).

After a cup of tea, they head out into the streets in teams of 3 or 4 and spend the night picking up bottles and broken glass, giving out flip flops, calming anti-social behaviour and staying with vulnerable people until they have a safe way home.

In the Republic, the Street Pastors have been operating in Cork since July 2012 with between 20 and 25 volunteers.

A group of  three to five people patrols the centre of Cork on Saturday nights and special occasions like St Patrick’s night, Leaving Cert results night and Rag week, staying in touch with a base team who offer advice and “take up things in prayer”, coordinator David Hoey from Cork’s Street Pastors told CatholicIreland.net.

“Every Saturday night there are incidents. We ring the team. They go and pray and it usually happens straightaway that we get a resolution of the situation.”

The team of volunteers includes Quakers, members of the Independent Churches, Presbyterians, Methodists and Catholics.

Their thirty hours of training covers safety awareness, non confrontational intervention, drug and suicide awareness, First Aid and a session with the Gardaí on the protocols of working in the same space as the police.

When the Pastors were starting in Cork, according to Mr Hoey, the Gardaí were a bit uncertain about having a group of “uniformed do-gooders” on the city streets, but they assuaged their concerns.

“They nominated us for a Community Award last year and we won it,” said Mr Hoey. 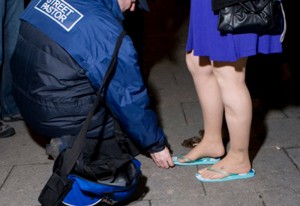 The volunteers pick up thousands of bottles and have given out 2,000 pairs of flip flops since July 2012, but Mr Hoey insists that it about people not bottles.

“If we only deal with one person and stay with him till 4.30am, that is fine. We want to bring Jesus’ attitude to the city.”

Having said that, picking up the bottles is important. “People come out of night clubs and cut their feet on broken glass. Also the bottles can be used as weapons.”

While the Pastors in Cork have no statistics to prove it, Mr Hoey believes they have contributed to making the streets a little safer. “We are bringing respect where it might not have been previously.”

Drink is at the root of the vast majority of incidents, he says. “We are not anti-drink but we do think there is an issue that needs to be addressed and that encompasses the entertainment and hospitality industries, people like ourselves, the Samaritans  and others on the street who are helping out.”

He would like to see the stakeholders getting together without any preconditions.

“To ask [questions like] ‘What is happening? Exactly how do you monitor people inside your hotels, bars and nightclubs when they drink too much? If you put them out on the street, do you make sure that they are alright?’”

Mr Hoey said that some bars call the Street Pastors, explaining they have someone ‘in a bad state’ and ask for their help. “I’d like to see more of that, that these groups link up a little better.”

Stories from Belfast Street Pastors annual report vividly illustrate their work: “‘M’ was hunched in a doorway. His dad had been diagnosed with cancer the previous day. His mates didn’t care. He later said, ‘I can’t believe you even noticed me here’.”

“We found a young girl very drunk with a man twice her age trying to pick her up. We helped her away  and after police intervention got her to safety.”

Street Pastors was started in Brixton, London in 2003 and there are now over 250 schemes and over 9,000 volunteers in the UK and other countries.