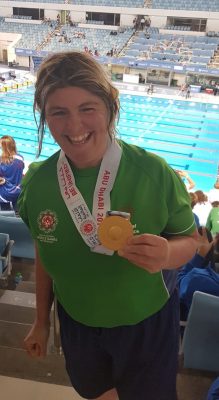 Ireland’s Special Olympics athletes returned home to a hero’s welcome on Friday after doing the country proud at the World Games in Abu Dhabi this month.

The biggest haul of medals was won by Patrick Quinlivan from Letterkenny, with a tally of two gold medals and five silver medals. Wicklow swimmer Aisling Beacom won a gold in the pool and a bronze in an open sea race. Ms Beacom knocked 50 seconds off her previous best time in the pool win.

Founded in 1969 by Eunice Kennedy Shriver, sister of former American President John F Kennedy, the Special Olympics movement is the world’s largest sports organisation for children and adults with intellectual and/or physical disabilities.

Special Olympics Ireland chair Brendan Whelan said for the athletes the benefits of Special Olympics go way beyond improved physical well-being. While only a minority of athletes make it to the world games, hundreds more take part in regular weekly activities held in their own localities. These activities, held across the country, are a source of fun, friendship and team spirit.

“Through sport, the athletes develop both physically and emotionally, make new friends, realise their dreams and know they can fit in. Special Olympics enables them to achieve and win not only in sport, but in life too,” Mr Whelan said.