Documentary considers Francis’ past and future 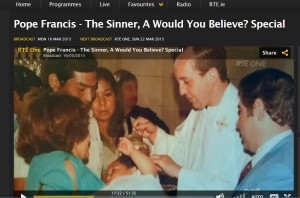 One aspect of Pope Francis’ greatness is his capacity to realise he was wrong, the popular theologian and former Master of the Dominicans, Fr Timothy Radcliffe, has said.

Fr Radcliffe was one of a number of contributors to a Would Believe documentary ‘Pope Francis – The Sinner’, which was broadcast by RTE on Monday evening.

The programme highlighted how as a young Jesuit provincial and head of the Jesuit seminary in Buenos Aires, Fr Jorge Bergoglio was both loved and loathed by his fellow Jesuits.

According to his Argentinean biographer, Elisabetta Pique, “He was almost hated by some Jesuits…”

A Jesuit contemporary of Fr Bergoglio’s, Fr Michael Petty, said “he provoked tremendous division” when he was provincial in Argentina, while another Jesuit former provincial, Fr Andres Swinnen, told the RTE programme “there’s something very unhealthy about the thirst for leadership that he has.”

The programme showed how his exile for two years in Cordoba changed his leadership style and this became evident when he was appointed auxiliary bishop of Buenos Aires in 1992.

However, his Jesuit confreres remain critical of his acceptance of the post, seeing it as an example of his ambition. “Lots of people were very cross with him for accepting high office; that’s not what Jesuits do,” Fr Michael Petty stated.

In just two years, since his election on 13 March 2013, Pope Francis has “crystallised a new vision of the church that includes everybody” notably the marginalised, according to his biographer, Paul Vallely.

The documentary questioned if the Pope, who is renowned for his simplicity, down to earth style and concern for those on the margins, and who has roused affection from believers and non believers alike, can hold the Catholic Church together and reform it at the same time.

The allegation that Fr Bergoglio was complicit with the military during the Dirty War when two of his Jesuits were kidnapped and tortured for five months in 1976 was also examined.

A sister of one of those Jesuits, Graciela Yorio, still believes the Pope has questions to answer. “He put them in a position of being completely unprotected”, she accused.

However, another former Jesuit provincial, Fr Andres Swinnen, said they were all under threat at the time while a contemporary and friend of the then Fr Bergoglio, Fr Juan Carlos Scannone, who was himself later accused of being a Marxist, explained that “the phones were tapped… and the military thought they were unprotected.”

Elsewhere in his contribution to the RTE documentary Fr Timothy Radcliffe said, “A very important part of Pope Francis’ spirituality is daring not to be in control”.

His view contrasted sharply with Cardinal Raymond Burke who expressed fear that the Pope’s reforms lack discipline and direction.

In her contribution, former Irish president, Dr Mary McAleese, paid tribute to the Pope for having “changed the tone” in the Church and “created the space for voices to speak”.

“He has loosened the awful intellectual clamp imposed by John Paul II and Benedict XVI where people were afraid of being silenced,” she observed.

However, she underlined that as a result “people are going to push the envelope on ideas” and they may very well challenge elements of the magisterium.

The former head of state, who is currently completing a doctorate in canon law, said that what Francis has done is “give us back the Church of Vatican II”.