Right to work strengthened for asylum seekers in Ireland 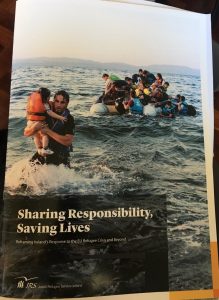 People seeking asylum will finally be allowed to work in Ireland.

Justice Minister Charlie Flanagan said asylum seekers will be allowed to take up any employment except positions in An Garda Síochana, the Defence Forces and the civil service. Mr Flanagan was speaking after the Government announced it has transposed the Reception Conditions Directive.

Asylum seekers will also now have the option to leave Direct Provision centres if they wish and look for their own accommodation. It is understood that up to 3,000 people will be eligible to take up temporary or permanent jobs.

The Irish Refugee Council welcomed the Government’s decision not to limit access to work to a restrictive list of occupations, or to require a minimum salary, or charge an expensive administrative fee, all of which had been allowed under previous rules.

Nick Henderson, CEO of the Irish Refugee Council, said:“We welcome the measures announced today, in particular the much broader range of jobs that a person can apply for, and the removal of any application fee. That people who have been waiting for a decision can immediately apply is also positive. The provision to review the arrangements after a year is also a good safety valve.”

However he cautioned that the provision that the Direct Provision Allowance (€21.60 per week) may be reduced or withdrawn for people who are working requires careful monitoring.

“People in Direct Provision may not have had the opportunity to gather savings or develop social networks in Ireland. The housing crisis has also made it very difficult for people to find accommodation outside Direct Provision,” he said.

Mr Henderson expressed disappointment that the Government has restricted access to the labour market to people who have waited more than nine months for a first instance decision from the International Protection Office.

“This is therefore not a blanket scheme. People who have already received such a decision, have an outstanding appeal or have received a deportation order are not eligible to work under this scheme,” he said.

Last week a report stated that Ireland has provided 1,570 places for refugees and deferred 525 since the government promised to take in 4,000, in September 2015.

“Ireland has mirrored other EU member states in falling far short of its targets. Operational difficulties and the impact of the housing crisis must be acknowledged,” said Eugene Quinn, national director of the Jesuit Refugee Service (JRS) Ireland, at the launch of the new report by JRS Ireland, “Sharing responsibility, saving lives”.

“Ireland can and should do more,” he said. 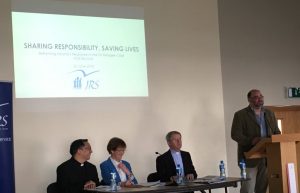 One of the report’s key findings is that Ireland will fail to reach this original commitment by the end of 2019, more than two years after the Irish Refugee and Protection Programme (IRPP) time frame. In the same period, the EU has failed to deliver on its own commitments, with only one in five of the promised 160,000 relocation places delivered by the end of 2017.

UNHCR figures show that there are 68.5 million persons forcibly displaced worldwide. In the period between 2015 and 2017, 1.5 million people travelled by sea to seek refuge in Europe. Just under 12,000 men, women and children lost their lives at sea making these journeys.

Fr Ismael Chan Gonzaga, SJ, of the Vatican’s Migrants and Refugees Section, said that nobody should be happy with this.

“Over three years more than 1.5 million men, women and children took to seas in flimsy vessels heading to Europe in search of safety and protection. Twelve thousand died at sea making those journeys. Faced with the scale of human need and loss of life, we are all called to act. The time for action is now.”

The JRS report commends the role of the Irish Navy as part of EU search and rescue operations that saved 445,000 lives since 2015. It questions how responsibility is shared across member states to receive and protect those saved. It concludes the EU has failed to uphold its founding principles in responding to the EU refugee crisis. The EU-Turkey deal was effective in stemming the arrivals by sea but represents a betrayal of European values. Rather than sharing responsibility across member states, Europe is shutting its borders, the reports says.

It goes on to state that the EU Refugee Crisis is not over. Given the scale of human need, everyone is called to act, as individuals, as communities, as Church and as states.