Religious life is called to play an essential role 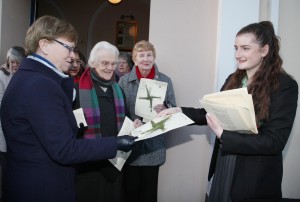 Pic shows a student from Holy Faith School Killester distributing St Brigid’s Crosses which they made as part of Catholic Schools Week after the mass. Pic John Mc Elroy.

Men and women in religious life must witness to values different to consumerism, Archbishop Diarmuid Martin of Dublin has said.

At a Mass to mark the contribution of 3,211 nuns, priests and brothers in his diocese on Day for Consecrated Life, Dr Martin said they must be people who show by the way they live their lives that “there is no half-way of compromise with the failed values of consumerism”.

Addressing a packed St Brigid’s church in Killester, the Archbishop described generosity as the fundamental ethic of the Christian believer because it is more than a mere ethic.

Generosity means breaking out of the closed logic of everyone getting their just-deserves and nothing more, he told up to 1,000 religious gathered in the Dublin church.

“It means breaking out of the logic of many models of today’s market economy or business strategies or policies of international solidarity,” he said.

Acknowledging that books have to be balanced and distributive justice respected, the Primate of Ireland underlined that there will never be a humane world which does not include the notion of generosity which enables those on the margins – and not just on the outward peripheries – to get that little extra which; can be the catalyst for helping a person to flourish or even survive. 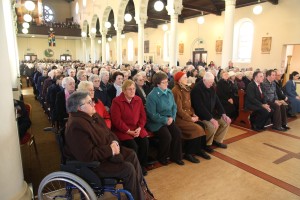 The Christian ethic of self-giving and generosity challenges the Church, which is called never to be self-promoting and self-defending or turned-in on itself, but rather to be a place where generosity is the by-word and the atmosphere which you breathe at every level, the Archbishop suggested.

He highlighted that everyone who encounters the Church must encounter, not a vast organisation with its structures even with its organisations of philanthropy, but a space where you realise that life can be lived within a different vision of welcome and outreach, where the quality of life of the highly qualified professional may be surpassed by the humble person who has no sense of self-pretence.

“Within the vision of a generously compassionate Church, religious life is called to play an essential role,” he stated.

He also underlined that religious life involves much more than a conceptual understanding of the evangelical counsels.

“Poverty, chastity and obedience are fundamentally not just renunciations. I could renounce wealth, and power and sensuality and be a fully self-centred person, interested in no one else but myself,” he admitted.

Religious must never be simple conformists. An overly conformist style of formation which sought to eliminate individuality and creativity had been “one of the most damaging things for religious life over the years”, he warned.

Coming close to Jesus should liberate and not trap people in scruples, the leader of the Church in Dublin said but he also warned that the opposite of conformity is not simply doing your own thing.

He said religious are called to constant renewal and renewal in religious life will emerge when that sense of generous compassion without boundaries is rediscovered and where generosity and compassion colour and dominate every aspect of our lives.

Elsewhere in his homily, the Archbishop appealed to all sections of the Church to support and encourage members of religious orders and celebrate their gifts.

He acknowledged, “Many say that the future of religious life is problematic”, a reference to the ageing profile and decline in numbers.

He said while some religious feel they are getting old and they can’t really change anything, the Archbishop told them to look to Pope Francis, who is now 79.

“I say to all those here today who are under 79 that there is no reason why you should feel it is time to step back and throw the towel,” he challenged.

The Archbishop urged them to never “give in” but be prepared to respond to the unexpected call as Pope Francis did when he was preparing to retire as Archbishop of Buenos Aires.

“Giving in is refusing to be generous; it is self-thinking and it is self-defeating and indeed it is the opposite of being generous and compassionate,” he chided.

The Vicar for Religious in Dublin, Sr Elizabeth Cotter addressed the congregation at the end of Mass and told them that St Brigid was “a woman who dared to be different”.

To applause, she explained that the thing she loved most about St Brigid is the kind of Church that she presented all those centuries ago – the monastery she opened was for men and women.

On the first day of Spring, the 63-year-old canon lawyer said, “We see the new signs of life all around us – the snowdrops are out. That fits in so well with the theme of our celebration of consecrated life – where Pope Francis has given us the task to wake up the world.”

She added, “Our archbishop has made it clear in his beautiful homily that that begins primarily with us and we can do this and make our contribution in our local churches during this year.”

Speaking after Mass, she explained that Archbishop Martin’s words about religious and age was a recognition that in religious life you never retire.

“We are consecrated to the day we die; in consecrated life we have this absolutely fundamental belief that I am on mission for the Lord until the day I die,” she said. 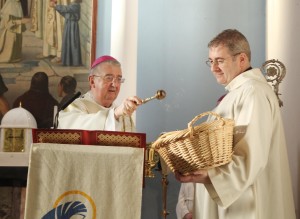 “If you look at some of the great founders of religious order, many did their best work in what we call old age. Age means nothing; it is your spirit your enthusiasm and your belief – and fundamentally your faith. If we believe that we have a mission to continue until the day we die – then we can do that, age doesn’t enter into it,” Sr Elizabeth Cotter said.

He praised Archbishop Martin’s words on age, explaining that he entered the Dominicans partly because there were so many young brothers but one of the reasons he stayed was because of the help he had been given from such an incredible store of wisdom among the older religious.

“Some people see religious life as sad and lonely but for me it has been a real path of joy,” he said.

Asked about the declining numbers of religious in Ireland, Bro Conor told CatholicIreland.net, “I think wherever religious life is lived authentically it can be a provocative presence in a sleeping secular world. Pope Francis is calling us to wake up the world and it is not so much quantity as the quality of our way of life that will make a difference.”

He said his advice to any young person considering religious life would be “go for it – because God is a God of surprises. He can surprise in all sorts of interesting ways.”

Sr Louise said the success of the YouTube video shows the curiosity people have about young people choosing to commit themselves to religious life. “The Holy Spirit uses curiosity – so bring it on!”

Students from Holy Faith Killester made 500 St Brigid’s crosses and gave them out after Mass but the crosses had to be rationed due to double the number of religious attending the Mass than was anticipated.