There are significant violations of religious freedom in 38 of 196 countries surveyed by Aid to the Church in Need (ACN).*

Bishop John McAreavey of Dromore launched ACN’s report on ‘Religious Freedom in the World – 2016’ in Ireland on Friday. It assesses the situation of many faith communities that are under attack, including Yazidis, Jews, Ahmadiyya Muslims and, of course, Christians.

“The report is a comprehensive piece of work,” said the bishop. “It highlights 38 states where there is evidence of ‘significant’ violations of religious freedom. Within this group, 23 countries were assessed as being in the most serious ‘persecution’ category; while the remaining 15 were placed in the ‘discrimination’ category.

“Since the last ‘Religious Freedom’ report was released two years ago, the situation regarding religious freedom has clearly worsened in the case of 14 states, while the situation in 21 states has shown no signs of obvious change.”

The report notes that religious extremism and intolerance are on the increase in those countries producing the highest number of refugees: Syria, Afghanistan and Somalia.

It notes that in many places, particularly in the Middle East, multi-religious communities were the norm, but increasingly they are becoming mono-religious environments.

The report states: “The rise of Islamism also represented a threat to diversity within the Muslim community with widespread reports of moderates being forced out in their thousands for refusing to accept Daesh [also known as ISIS] and other hard-line groups.” 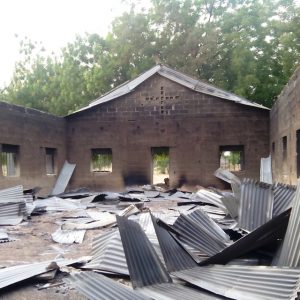 However, Dr McAreavey said that the report shows as “misguided and hateful” any superficial descriptions of the suffering of Christians and other faith communities in majority Muslim countries as a ‘battle of religions’. He continued: “The cruelty inflicted on the faithful, which is recorded in these pages, is quite simply a rejection of the God of love.”

He describes the report as serving “a very simple but powerful role: it is a plaintive statement of wrongdoing. It is a raising of our voices for those who have no voice. It seems to me that without first identifying exactly the nature and the extent of wrongdoing, one can never fully address that wrongdoing. Strangely, this report gives us hope by allowing us to examine the extent and full horror of those who suffer for their faith across the world. Our work now – thanks to the efforts of ACN – must surely be to challenge religious intolerance and persecution as a fundamental breach of human rights.”

‘Religious Freedom in The World – 2016’ is available to download here: http://religion-freedom-report.org.uk/full-report.

To learn more about ACN or to support its campaigns, visit: http://www.acnireland.org/#.

*ACN is a pontifical foundation that began in 1947 as a pastoral initiative by a Dutch priest, Fr Werenfried van Stratten, who earned the nickname ‘the bacon priest’ because of his work to provide food aid to German refugees fleeing Eastern Europe after the Second World War. This developed into a mission to provide clandestine support to the faithful in Communist countries where all free religion was effectively banned. Now ACN works to support religious freedom across the globe and it has 20 branches worldwide.