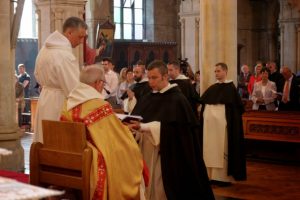 The Co Laois town of Rathdowney is hosting a major festival of faith over the coming weeks to mark the ordination of one of its parishioners.

Eoin Casey OP was ordained to the diaconate on 15 March 2015 by Archbishop Diarmuid Martin of Dublin.

He will become the first member of the local community in Rathdowney to be ordained a priest for a number of decades when he is ordained for the priesthood by the Dominican Order on Saturday 9 July in Dublin.

He will celebrate his first Mass in Rathdowney on Sunday 10 July at 12 noon.

Among the highlights will be a gala concert by The Priests at Holy Trinity Church Rathdowney on Friday evening, 1 July at 8pm.

Faithfest commenced last Saturday with an afternoon workshop for choirs and an opening liturgy for the Festival led by Fr Liam Lawton.

Tonight Thursday 23 June will see the launch of the book, ‘Ambassadors of Hope’ at the Workhouse Museum in Donaghmore.

The book chronicles the lives of the hundreds of men and women from Rathdowney and surrounding parishes who served as priests and religious all over the world.

It is written by Niall O’Doherty, and will be launched by journalist Charlie Bird and Passionist priest and broadcaster Fr Brian Darcy.

A day of pilgrimage will take place on Sunday 26 June. This will encompass Grogan-Aghaboe-Kilkenny City and the Rower where the Grogan church windows are.

Mass will be available throughout the day. The Rower parish will host a reception in the evening.

“This Eucharistic pilgrimage is inspired by the stained glass windows which were a feature of Grogan church for many years. Most of these windows now reside in the churches of Glenmore and the Rower in South Kilkenny,” Fr Delaney explained.

On Tuesday 28 June, RTE’s Mary Kennedy will host a public conversation titled ‘For One Night Only: Mary Meets John and Joanne.’

The RTE star will be joined by John McAreavey and Joanne O’Riordan who will share something of their own stories and how faith has played a part in their lives and helped them overcome adversity.

An evening of Healing and Reconciliation will take place in Errill Church on Wednesday 29 June.

Bishop Brendan Comiskey will lead the two sacraments and the evening will commence at 8pm.