Home > News > Rally in solidarity with baby Hope and his mother

Rally in solidarity with baby Hope and his mother 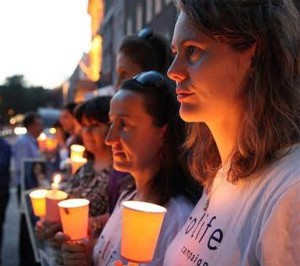 A vigil highlighting the need for “equal care” for both mother and baby in crisis pregnancy situations will take place this evening 22 August from 7.30 – 8.15pm outside Dáil Éireann.

The vigil, organised by the Pro Life Campaign, comes in the aftermath of the first publicised attempt by a woman to have an abortion on the grounds of suicide under the Protection of Life during Pregnancy Act.

In it, a pregnant migrant woman, who said she had been raped and was suicidal, applied for an abortion.

Two psychiatrists approved her request, but it was turned down by the third member of the team, an obstetrician.

Instead the baby was delivered by C section at 25 weeks and is now recovering in an incubator in a Dublin hospital.

The case has sparked a furious clamour for a wider abortion regime in Ireland, with statements from Labour TDs demanding greater access to abortion and for Article 40.3.3 of the Constitution, which recognises the right to life of the unborn, to be deleted.

On Wednesday hundreds of pro abortion/pro  choice advocates protested outside the GPO in Dublin’s city centre.

Today those who believe in the equal right to life of the unborn will be holding  a candle lit vigil outside Dáil Eireann (Moleworth Street) at 7.30pm.  (A prayer service will be held beforehand at 6pm in Clarendon Street Church off Grafton Street).

The vigil, organised by the Pro Life Campaign, is to express “solidarity with the baby and concern for his mother”.

“It is clear that the mother and the baby at the centre of this tragic case should have been better cared for,” the PLC has said.

Speaking to CatholicIreland.net, Wendy Grace from PLC said it was important for the public to attend this rally, or a second rally being held on Saturday at 4pm in  O’Connell Street, to restate the “importance of the equal care that is due to the baby”.

She said that the media coverage during the week had been one-sided, with most of the reporting through a “pro abortion lens”.

“It has been a tragic situation for the mother and the baby. For the mother, who by all accounts came from a conflict zone and arriving in Ireland, shared her distress of coming from a situation of rape and conflict. And the only support in terms of advice was information about abortion. I am very shocked that she was not given some sort of psychological care which should have immediately clicked into place,” she said. 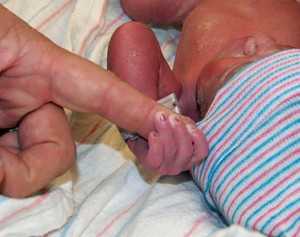 “Then on the other side is the baby in hospital, delivered at 25 weeks, putting the baby at risk.”

Ms Grace said that it was remarkable that in media coverage no one was interested in the baby – “Is it a boy or a girl? There has been no effort to find out.”

On Saturday afternoon at 4pm a Vigil of Hope at O’Connell Street will express support for Baby Hope.

“We want to tell him he is not alone,” said Niamh Uí Bhriain of the Life Institute. “We are standing with him.”

Participants at the Saturday vigil are invited to bring a white candle and gifts for premature babies.

Ms Uí Bhriain said the Vigil of Hope was called because so many people wanted to send a message of hope to the baby, and one of compassion to his mother who had been failed by the new abortion law.

She said that the plight of the baby, who now faced an enormous struggle and the possibility of brain damage and blindness, was being largely ignored by media coverage of the abortion controversy.

“Usually when we hear about a tiny premie fighting for life, everyone is rooting for that baby, but in this case, we are hearing abortion supporters insisting that the baby should be dead: that he should have been aborted,” said Ms Uí Bhriain.

Wendy Grace from PLC said she would like to see a “catalogue of support” that kicks in for asylum seekers coming from conflict areas.

“I feel the woman here was failed as an asylum seeker.  She should have felt herself to be in a safe environment, and given proper psychological  and social support.”