Home > Featured > R.I.P. is ‘too Catholic’ for the Orange Order

R.I.P. is ‘too Catholic’ for the Orange Order 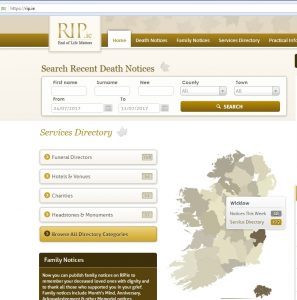 The Orange Order has advised its members not to use the phrase ‘Rest in Peace’ during funeral services or when offering condolences because the phrase is ‘un-Protestant, un-Biblical’ and belongs to ‘Catholic superstition’.

The advice appears in the Protestant fraternity’s newspaper, the Orange Standard, and the article is based on a Facebook post published by Wallace Thompson, secretary of Evangelical Protestants Northern Ireland, who subsequently admitted in a BBC interview that the issue was a sensitive one because it involved people who were grieving. However, he said that RIP was a prayer and, according to his beliefs, prayers for the dead should not be encouraged.

Whether this means that members of the Orange Order should or shouldn’t use the death notices website www.rip.ie is a moot point.

Of course, we Catholics do pray for the dead, because we believe such prayers can help release souls from Purgatory, a place of purification necessary before one may enter into the joy of heaven.

However, the phrase ‘Rest in Peace’ goes back to the very earliest days of the Church – with the words resquiescat in pace [may they rest in peace] or dormit in pace [he sleeps in peace] found on Christian tombs dating from the 4th century. This is, of course, long before the arrival of Protestantism 500 years ago.

Indeed, not only is the inscription RIP, or a version of it, common on Catholic, Anglican, Methodist and Lutheran graves, the phrase ‘rest in peace’ has been found written in Hebrew on a Jewish tomb dating from the first century BC.

The phrase ‘rest in peace’ is used during our modern day funeral liturgies, which we Catholics call ‘Requiem Masses’, because the first words of the entrance antiphon in the Latin Mass were Réquiem ætérnam dona eis, Dómine; et lux perpétua lúceat eis [Eternal rest give to them, O Lord; and let perpetual light shine upon them].

Few people will be concerned about the Orange Order’s advice – seeing it is just another curiosity about an organisation that was ostensibly founded to celebrate the result of a battle 327 years ago, but which has been openly hostile to the Catholic Church and which has members that engage in the vilest of sectarian behaviour. Before the Good Friday Agreement, the Orange Order held several controversial and confrontational parades through predominantly Catholic districts where residents saw the parades as expressions of Protestant triumphalism and bigotry.

Indeed, it may really be that the Orange Order’s censure of the phrase RIP is because the phrase is rooted in Latin, the language of the ‘Roman Church’.

In any event, we Catholics should and shall continue to pray for the holy souls in Purgatory and to gain indulgences for them through good works or by performing devotions such as yesterday’s Reek Sunday pilgrimage to the summit of Croagh Patrick in Mayo.

According to tradition, one of the most effective prayers for the dead is that of St Gertrude the Great, a Benedictine sister who lived in the 13th century. It is said that our Lord promised her that 1,000 souls would be released from Purgatory each time this prayer was said devoutly.

Eternal Father, I offer Thee the Most Precious Blood of Thy Divine Son, Jesus, in union with the masses said throughout the world today, for all the holy souls in purgatory, for sinners everywhere, for sinners in the universal church, those in my own home and within my family. Amen.

We should also pray for those who are hostile to our Church – may they too find peace.