Home > News > Process of healing needs to include truth: Pope

Process of healing needs to include truth: Pope 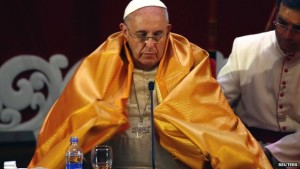 Pope Francis has paid tribute to Sri Lanka’s efforts to heal the scars and consolidate peace after its lengthy civil war which claimed as many as 60,000 lives.

Arriving in the country on Tuesday, the Pontiff “It is no easy task to overcome the bitter legacy of injustices, hostility and mistrust left by the conflict. It can only be done by overcoming evil with good and by cultivating those virtues which foster reconciliation, solidarity and peace.”

But he warned that the past couldn’t be whitewashed over and that the process of healing also needs to include the pursuit of truth, not for the sake of opening old wounds, but rather as a necessary means of promoting justice, healing and unity.”

He called upon Sri Lankans “to accept one another, to respect legitimate diversities, and learn to live as one family.”

The Pope was greeted on his arrival in Colombo by President Maithripala Sirisena, who only assumed office last Friday.

Pope Francis said in his address that his visit to Sri Lanka is “primarily pastoral. As the universal pastor of the Catholic Church, I have come to meet, encourage and pray with the Catholic people of this island”.

He added that a highlight of the visit will be the canonisation of Blessed Joseph Vaz, “whose example of Christian charity and respect for all people, regardless of ethnicity or religion, continues to inspire and teach us today.”

Pope Francis concluded the first day of his visit to Sri Lanka with an address to an inter-religious meeting, in which he told a cross-section of the country’s religious leaders that harmony among different faiths is critical, but it cannot come at the expense of the distinctive identity of each.

Buddhists in the conference hall in Colombo chanted a welcome to the Pope, and a Hindu leader presented him with a bright orange cape.

Muslims and representatives of other Christian communities were also present among the 1,000 people at the meeting.

Following a speech by the Buddhist monk Vigithasiri Niyangoda Thero, the Pope gave an address in which he recalled the teachings of Vatican II and the “deep and abiding respect for other religions.”

He said the Church in Vatican II stated that “she ‘rejects nothing of what is true and holy in these religions. She has a high regard for their manner of life and conduct, their precepts and doctrines’. For my part, I wish to reaffirm the Church’s sincere respect for you, your traditions and beliefs”.

The Pontiff said he hoped his visit would help to encourage inter-religious cooperation, and help heal a society torn by a long civil war.

“Surely the fostering of healing and unity is a noble task which is incumbent upon all who have at heart the good of the nation, and indeed the whole human family,” the Pope said.

Inter-religious cooperation provide opportunities for dialogue, which are essential if we are to know, understand and respect one another, the Pope told the assembled religious leaders.

However, he underlined that experience has shown, for such dialogue and encounter to be effective, it must be “grounded in a full and forthright presentation of our respective convictions”.

“Certainly, such dialogue will accentuate how varied our beliefs, traditions and practices are. But if we are honest in presenting our convictions, we will be able to see more clearly what we hold in common. New avenues will be opened for mutual esteem, cooperation and indeed friendship,” he suggested.

“For the sake of peace, religious beliefs must never be allowed to be abused in the cause of violence and war,” the Pope underlined and he said all religious leaders should “denounce acts of violence when they are committed.”

He continued, “It is in this spirit of respect that the Catholic Church desires to cooperate with you, and with all people of good will, in seeking the welfare of all Sri Lankans. I hope that my visit will help to encourage and deepen the various forms of interreligious and ecumenical cooperation which have been undertaken in recent years.

Elsewhere, the Pope said on Tuesday that he had come to Sri Lanka in the footsteps of my predecessors Popes Paul VI and John Paul II to demonstrate the great love and concern which the Catholic Church has for Sri Lanka. It is a particular grace for me to visit the Catholic community here, to confirm them in their Christian faith, to pray with them and to share their joys and sufferings.

“It is equally a grace to be with all of you, men and women of these great religious traditions, who share with us a desire for wisdom, truth and holiness.”

“How many ways there are for the followers of the different religions to carry out this service! How many are the needs that must be tended to with the healing balm of fraternal solidarity!”

“I think in particular of the material and spiritual needs of the poor, the destitute, those who yearn for a word of consolation and hope. Here I think too of the many families who continue to mourn the loss of their loved ones.”