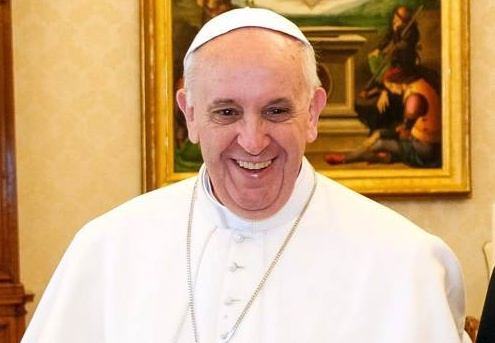 In the two years of Pope Francis’ pontificate we have seen the Holy Father reaching out and evangelising through action as well as words, Archbishop Eamon Martin said as he congratulated the Pontiff on the second anniversary of his Petrine Ministry.

Speaking at St Patrick’s Cathedral in Armagh, ahead of participating in the ‘24 hours for the Lord’ prayer initiative, the Primate of All Ireland said, “For me, and for all who exercise roles of leadership within the Church, the words and actions of Pope Francis provide great encouragement but also great challenge”.

Paying tribute to Francis, who marked the second anniversary of his pontificate on Friday, Archbishop Martin recalled, “I remember this day two years ago hearing Cardinal Tauran announce the words ‘Habemus Papam’ and that a cardinal from Argentina, Jorge Maria Bergoglio would be the new Pope, the first to choose the name Francis.”

“Like many people I wondered just who this man was and what kind of pope might he be.”

“The keywords of his Petrine Ministry have been ‘joy’ and ‘mercy’ and, from the beginning, Pope Francis has shown great humility while constantly encouraging us to show mercy in our lives and to reach out to those in the margins of society, to bring them the Good News of Jesus Christ.”

Referring to the Pope’s statement, “I prefer a church which is bruised, hurting and dirty because it has been out on the streets, rather than a church which is unhealthy from being confined and from clinging to its own security” (EG, 49), Archbishop Martin said “we really get some insight to what lies close to the heart of Pope Francis”.

Another important theme in the ministry of Pope Francis so far is the importance of the Church’s pastoral support for marriage and the family, the Archbishop observed.

The Synod of Bishops in Rome last October addressed this theme and will continue to do so when it gathers again for three weeks during this October.

“Already the Synod has highlighted that marriage preparation should be understood as a life-long catechesis – or itinerary of faith – about the Sacrament of Marriage,” the leader of the Irish Church commented.

He recalled that Pope Francis also addressed marriage and family in his message for World Communications Day 2015 saying, “families should be seen as a resource rather than as a problem for society.”

“Families at their best actively communicate by their witness the beauty and the richness of the relationship between man and woman, and between parents and children. We are not fighting to defend the past. Rather, with patience and trust, we are working to build a better future for the world in which we live.”

Archbishop Martin asked the faithful to join with him in offering prayerful good wishes to Pope Francis for continued health and happiness in his future ministry.

“May the Holy Spirit pour out upon him in abundance and bless him with all the gifts needed to shepherd the flock of the Catholic Church, and to strengthen all our brothers and sisters in the faith and to be an inspiration to all people of goodwill throughout the world. Ad multos annos!” he said.

Meanwhile, Pope Francis has given another wide-ranging interview in which he spoke about the conclave that elected him, curial reform and clerical sexual abuse.

Of the March 2013 conclave, the Pontiff recalled that he was praying the Rosary during the vote.

“I usually pray three rosaries daily, and I felt great peace, almost to the point of insentience. The very same when everything was resolved, and for me this was a sign that God wanted it, great peace.”

“From that day to this I have not lost it. It is ‘something inside’ it is like a gift. I do not know what happened next. They made [me] stand up. They asked me if I agreed. I said yes. I do not know if they made me swear on something, I forget. I was at peace.”

“After I came out and I did not know what to say,” he continued. “And you are the witnesses of everything else. I deeply felt that a minister needs the blessing of God, but also that of his people. I did not dare to ask the people to bless me. I simply said: pray that God may bless me through you. But it came out spontaneously, also my prayer for Benedict.”

Pope Francis did not say whether he would retire but said that “an institutional door has been opened” with the resignation of Pope Benedict.

“I have the feeling that my pontificate will be brief: four or five years; I do not know, even two or three,” he added. “Two have already passed. It is a somewhat vague sensation. Maybe it’s like the psychology of the gambler who convinces himself he will lose so he won’t be disappointed and if he wins, is happy. I do not know. But I feel that the Lord has placed me here for a short time, and nothing more.”

Separately, on Friday Pope Francis declared a special Jubilee Year of Mercy which will begin on 8 December, the Feast of the Immaculate Conception, and continue until 20 November 2016 – the Feast of Christ the King.