Home > News > New priest ordained for the diocese of Derry

New priest ordained for the diocese of Derry 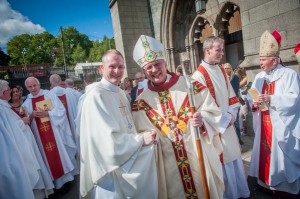 Our Church and society need to hear hope Bishop Donal McKeown emphasised in his homily on Sunday at the ordination of a new priest for the diocese of Derry.

Addressing Fr Seán O’Donnell in St Eugene’s Cathedral, the Bishop told him, “You are called to be a sower of hope.”

Elsewhere in his homily, he told the 42-year-old Donegal native, “Seán, sow generously in season and out of season. Leave worries about the growth to the Lord. There is wisdom in the saying that ‘worry is the darkroom where negatives develop’.”

Telling the former school bus driver and manager of Derry’s Bowling Alley that he was being ordained to sow the seed in hope, he warned him that he was “stepping out in a time when many will say that the ground is not very receptive for word of God”.

“The Christian’s voice may sound thin amid the clamour of other voices. Your ministry may be one where the immediate fruit can seem scarce,” the Bishop of Derry added.

But he also highlighted that unless our generation finds a new way to sow in hope, unless each of us grows where we are planted, then “there will be no-one to speak to the next generation about the love, forgiveness and healing that Jesus wishes to announce to every age”.

“But we also live surrounded by a quiet despair that our economy is built on shaky foundations, that uncivilised hordes from somewhere else might take our hard-won wealth,” and quoting from Macbeth, he observed, that life may be “full of sound and fury, signifying nothing.”

He said that in the high levels of addiction and mental illness, we sense the dread that, “Life’s but a walking shadow, a poor player, That struts and frets his hour upon the stage, and then is heard no more.”

He reminded the new priest that he was being ordained not merely to do a job or to fill a post, but as a ambassador for Christ.

“You have answered a divine call. In our culture, the emphasis is on having the maximum amount of choice and on the individual’s right to choose whatever good or lifestyle he or she wants. The person becomes the arbiter of all right and wrong. If I want something I should be entitled to it. I can divinise my transient adult wishes.”

“A vocation – as seen right back to the time of Abraham and Moses, Mary and Paul – means that we believe we are called by the eternal God to be and to become something, not in the service of my plans but in order to be used to be used for God’s plans.”

Fr O’Donnell is the eldest child of Joe and Rosemary O’Donnell’s nine children. He entered the seminary eight years ago having previously worked as a school bus driver, the local Maxol shop in Muff and as a duty manager in Derry’s Bowling Alley.

He celebrates his first Mass in the Sacred Heart Church in his native Muff in Co Donegal at 7.30pm this evening.

The newly ordained priest recalled his late twin brother James at the ceremony on Sunday.

“I am blessed with wonderful memories of the example, friendship, love and help and the prayers of many people whom we pray for and entrust back to share eternal life with God,” he said.