Pray for success of Pan-Amazonian Synod

Irish Catholics are being asked to pray for the success of the Pan-Amazonian Synod that is currently underway in Rome, with 114 bishops in attendance from all nine countries with territory in South America’s Amazon basin.

The synod is seen as crucial because of the vital role that the Amazon rainforest plays in the global ecology of our planet. The rainforest covers 5.5 million square kilometers containing an incredibly rich ecosystem – 40,000 plant species, 1,300 bird species, 3,000 different types of fish and 2.5 million different insects. It also acts as the world’s lungs, providing us with the oxygen we breathe, as well as playing a crucial role in reducing the level of carbon in the atmosphere, thereby reducing the impact of global warming.

The rainforest is also home to some 500 different indigenous Amerindian tribes, but these people and the environment that sustains them are threatened by the commercial activities of loggers, mining companies and cattle ranchers. 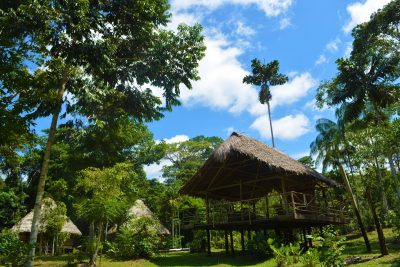 A village in a forest clearing in the Amazon basin (Pic Caesar Oleksy via Pexels).

One of the key reasons that Pope Francis has called this extraordinary synod in Rome is because of the looming ecological crises that face the world – global warming, rising sea levels and mass extinctions of plants and animals – as highlighted in his encyclical Laudato Si’.

‘I encourage the faithful to pray for the success of this synod, the purpose of which is to serve the good of humanity,’ said the chairman of the Irish Bishops’ Council for Justice and Peace, Bishop Alan McGuckian of Raphoe. ‘My prayerful hope is that the synod will bear fruit in motivating us to continue our efforts to respect, and be stewards of all living beings and creation.’

In addition to the environmental imperatives for holding this extraordinary meeting, the synod is generating much attention because it is providing a forum for those who advocate for the ordination of married, non-celibate priests. The reason why the ordination of married priests is being discussed at this meeting is that the Amazon region suffers particularly acutely from a shortage of ordained personnel.

This means that not only are the faithful deprived of the Eucharist, but pastoral care is provided on a sporadic, rather than a daily basis, noted the synod’s chairman, Cardinal Claudio Hummes of Brazil, this week.

‘Participation in the celebration of the Eucharist, at least on Sundays, is essential for the full and progressive development of Christian communities and a true experience of the Word of God in people’s lives,’ he said. ‘It will be necessary to define new paths for the future.

‘During the [pre-synod] consultation stages, local communities, missionaries and indigenous persons, faced with the urgent need experienced by most of the Catholic communities in Amazonia, requested that the path be opened for the ordination of married men resident in their communities, albeit confirming the great importance of the charisma of celibacy in the Church.’