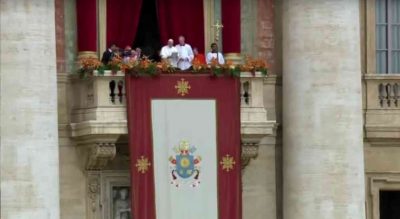 The Pope’s address is given from a balcony over looking St Peter’s Square (Photo: Vatican Media)

The Pope departed from the prepared text of his Urbi et Orbi address yesterday to condemn the terrorist bomb attacks in Sri Lanka that left 290 people dead and more than 500 seriously injured.

Bombs were detonated at two Catholic churches, St Anthony’s Shrine in Kochchikade and St Sebastian’s in Negombo, both north of the Sri Lankan capital, Colombo, on Easter Sunday morning, as well as at an evangelical church, Zion Church, in Barricaloa on the eastern side of the country. Bombs were also detonated at four hotels in Colombo.

So far no one has claimed responsibility, but police believe Muslim militants are to blame. The attacks on the churches were timed to target Easter Sunday worshippers.

In yesterday’s prepared text, the Pope expressed his concern for, and solidarity with, those suffering the effects of war and conflict in Syria, the Middle East, Libya, South Sudan and Ukraine, as well as concern for those in South America who are suffering because of political disputes there.

In the case of Syria, the Pope said there was a danger that the world was becoming “ever more resigned and even indifferent” to the eight-year conflict. In the case of Yemen, where famine and cholera are beginning to take hold, he said he thought especially of the children there who were “exhausted by hunger and war”.

But turning his attention to Sri Lanka, Pope Francis said: “I wish to express my heartfelt closeness to the Christian community [there], wounded as it was gathered in prayer, and to all the victims of such cruel violence.

“I entrust to the Lord all those who have tragically perished, and I pray for the injured and all those who suffer as a result of this tragic event.”

The Urbi et Orbi (“to the city and the world”) address is traditionally given on Christmas Day and Easter Sunday from the central gallery of St Peter’s Basilica.

Yesterday, there were some 70,000 people gathered in St Peter’s Square to hear the address. The Pope told them: “This message is also addressed to every person in the world. The resurrection of Christ is the principle of new life for every man and every woman, for true renewal always begins from the heart, from the conscience. Yet Easter is also the beginning of the new world, set free from the slavery of sin and death: the world open at last to the Kingdom of God, a Kingdom of love, peace and fraternity.

“Christ is alive and he remains with us. Risen, he shows us the light of his face, and he does not abandon all those experiencing hardship, pain, and sorrow.”

There has been widespread condemnation of the Sri Lankan terrorist attacks from religious and political leaders across the world. In this country, President Michael D Higgins said: “People in Ireland will have heard with great concern of the heavy loss of life that has happened at places of worship in Sri Lanka, at a time of religious significance.

“The right to the freedom of worship is a fundamental right. To the families of those who died and those who have been injured I send the sympathies and solidarity of the people of Ireland.”